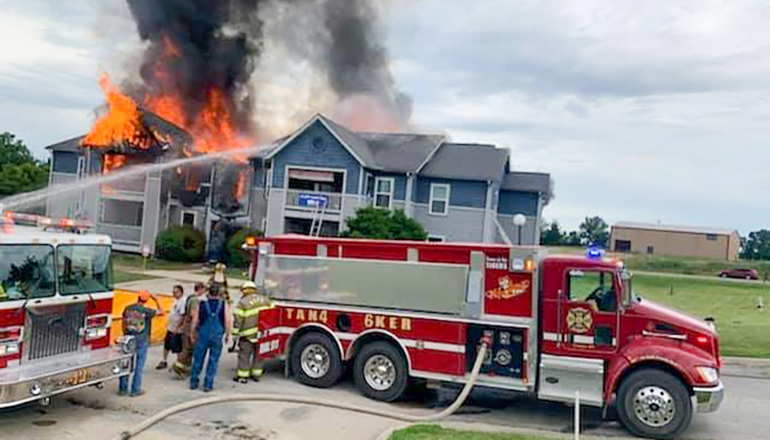 A dispatcher with the Mercer County Sheriff’s Office confirms there are no known injuries among occupants of the Cedar Ridge Apartments who were able to escape a raging fire with heavy smoke yesterday afternoon.

The Mercer County Fire Protection District was dispatched to the blaze east of Princeton on Highway 136. When crews arrived, the multi-apartment building was heavily involved with fire and smoke that could be seen for miles around. Mutual aid was immediately requested from Mercer Fire Department and the Spickard Fire and Rescue. Medicine Creek Fire Protection District and the Grundy County Rural were requested for water tanker shuttles.

The first arriving crews and truck 7042 were set up to start dump tank operations. Hagan’s Towing removed parked vehicles away from the burning building. Crews performed vent, enter, and search of two apartments to ensure all those occupants were out. It’s reported one occupant jumped from a third-floor apartment prior to fire crews arriving. Crews utilized a blitz-fire ground attack monitor to start cooling the fire and slow the spread until the tanker shuttle was established. One Mercer county firefighter was treated for heat exhaustion by Mercer County Ambulance personnel.

The call came in just after 3:30 pm on Sunday and crews were on the scene until after midnight. It’s estimated over 80,000 gallons of water was used to gain control of the fire The Missouri Division of Fire Safety Fire Marshal’s office has investigated. No one was given as to a possible cause.