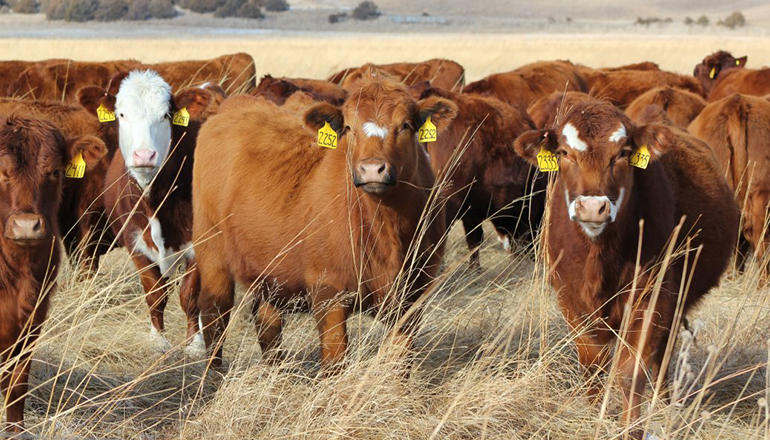 Cattlemen learned the latest in an Aug. 16 “Beef ReproGene” meeting at the University of Missouri Extension Center in Howell County. MU reproduction and genetics specialists gave updates before and after dinner.

Dave Patterson, who started the MU Show-Me-Select program 22 years ago, led with a refresher. Why develop? “Heifers that conceive early stay in the herd longer,” he said. “That makes more pounds of beef over their lifetime.”

The heifer protocols start with herd health. Pre-breeding exams follow. Those ensure a first-calf heifer can be bred and deliver a live calf.

Reproduction tract scores taken four to six weeks before breeding show levels of puberty, or readiness to breed. A heifer scoring 1, or infantile, can be culled. She’ll earn more in a feedlot. Heifers scoring 4 or 5 are cycling, ready to breed.

Another exam, the pelvic measure, tells that a heifer can safely pass a calf at birth. Calving ease cuts death losses of heifers and their calves. That helps herd profits.

A well-known yellow card spells out rules for the SMS program and sales.

The SMS leadership board, made up of beef farmers, sets the rules. Those are based on new science.

A similar set of guides details MU protocols to synchronize estrus in beef heifers and cows. Those appear in the back of AI sire catalogs.

Patterson urged producers to follow only current-year guides as they are updated annually.

That opened the program for Jared Decker, an MU beef geneticist. He had news of the week. Rules from the board will require all bulls to be tested for genomic-enhanced expected progeny differences.

Those scores, based on DNA tests, boost reliability and accuracy of calving ease and other traits, Decker said. The DNA test scores are combined with pedigree and production data.

Show-Me-Select sales, held spring and fall, gain the most visibility for the heifer program. Those sales boost the economy, but the main value comes in improved farm herds.

Decker, the geneticist, admitted genomics are complex. But he assured farmers that the science behind them is proven.

At that point, Decker held up his cell phone. “Who can explain how a cell phone works?” he asked. No one stepped forward. “I don’t know how my phone works, but I know that I can call my mother. I don’t need to know how that call goes to a satellite and then back down to reach her.”

He urged producers to use genomic-enhanced EPDs. “They work,” Decker said.

Joining the veteran team of specialists was Jordan Thomas. He’s a new Ph.D. graduate joining MU Extension. His research has been on sex-sorted semen. With that, AI breeders can produce bulls or heifers. The research continues.

That new topic brought the most questions from the crowd of beef farmers.

Patterson noted that farmer questions are more complex than when he started SMS. When he asked how many had tried fixed-time AI, about half held up a hand. “In the beginning, I might get one,” he said.

Any Missouri producer can join the Show-Me-Select program through their regional MU livestock specialists. It’s free.