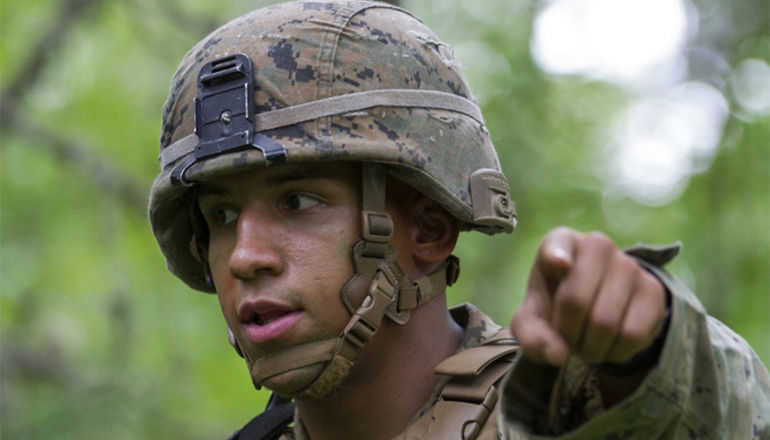 Marine Forces Reserve consists of skilled warfighters who are not only prepared to serve their country at all times but who are also prepared to support and provide in their local communities as well.

Sgt. James Ellis, a rifleman with Weapons Company, 3rd Battalion, 23rd Marine Regiment, 4th Marine Division, and a full-time student at Missouri State University majoring in nursing, is one of those skilled Marines who serves his country while bettering himself to help his community in the civilian sector.

“I joined the Marine Corps Reserve after I had gotten off of active duty,” said Ellis. “I knew that I wanted to keep a hand in the Marine Corps but I also wanted to further my education and obtain my bachelor’s degree. Joining the Reserve allowed me to do both.”

Ellis recently took part in 4th Marine Division’s Annual Rifle Squad Competition at Joint Base Elmendorf Richardson in Anchorage, Alaska. Ellis served as the squad leader for 3rd squad, made up of Marines from across the country in 3rd Battalion, 23rd Marines. As a squad leader, he was responsible for the discipline, training, control, conduct, and welfare of his team.

“This was a very unique experience for me, said Ellis. “Most of these Marines weren’t even riflemen and have never had the opportunity to conduct training like this. We were all from different parts of the battalion, so most of us didn’t even know each other at the beginning. I briefed my squad and tried to prepare them, as much as possible, with the knowledge that I thought would be evaluated. They knew what I expected before the competition kicked off and executed flawlessly.”

The Annual Rifle Squad Competition gives Marines the ability to perform in realistic training situations and execute the tasks they have learned prior to the competitions.

“Having classes cover this material can only do so much,” said Ellis. “Most Marines are visual and hands-on learners, so being able to actually conduct this training was invaluable. This training gave the Marines the opportunity to properly write a 5-paragraph order, call up a 9-line in a stressful situation, and realize every part that goes into patrol base operations. I believe that this event was very beneficial to the Marines training here.”

Reserve Marines like Ellis are able to put all of their Marine Corps knowledge to the test during these training exercises and also bring aspects from their civilian lives in to enhance their overall performance.

“I can definitely say that the Marine Corps has made a difference in who I am,” said Ellis. “The military forced me to grow up and mature, made me a more responsible citizen as well as teaching me a pristine work ethic. This applies to school, as I work countless hours to maintain a 4.0, as well as throughout the rest of my life.”