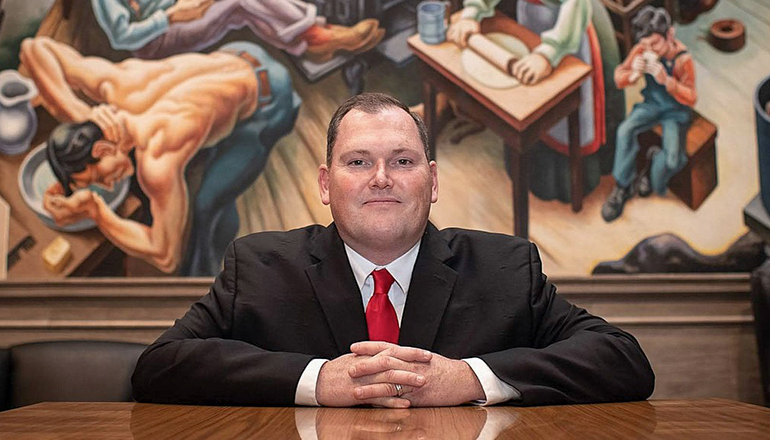 The Missouri House on Wednesday elected the first Speaker in state history from eastern Missouri’s Arnold. House Speaker Rob Vescovo, R-Arnold, was elected Speaker on his 44th birthday, with his wife Amanda and their five children in the chamber in Jefferson City.

Education was a primary theme during Vescovo’s address to the House. He says he was ridiculed by other students and by some of his teachers while growing up, due to his ADHD and other learning challenges. ADHD is attention-deficit/hyperactivity disorder.

Speaker Vescovo says it’s important to learn from students who struggled within the education system.

“As a student who struggled, I believe I do have valuable insight into what works and what doesn’t. I believe it is time our system of education listens to these students, including me, who have seen firsthand how the system can and should improve,” Vescovo tells the House.

He says Missouri’s teachers need the time, resources, and flexibility to be able to work with children on a personal level.

Vescovo wants to provide parents with the option of sending their children to schools that will best serve their needs. He says the COVID pandemic has taught parents across Missouri an important lesson.

“Every parent wants to keep their kids safe and healthy, but we have also learned that teachers are more effective as educators in person and that kids must be in school to learn effectively, in school,” says Vescovo.

House Republicans in the chamber stood up and applauded that call.

Vescovo says the Legislature must continue to examine ways to give schools the resources they need to stay open.

He’s also challenging the Legislature to make a stronger commitment to early childhood education. Vescovo says the General Assembly must support policies that focus on empowerment, rather than imprisonment.

“If we want to better serve the people of our state, we must invest in our young people on the front end, rather than pay the cost of incarceration on the backend when our system fails them,” Vescovo says. That line received a bipartisan standing ovation from the House.

Vescovo, who was adopted, is also calling on the Legislature to expand Missouri’s adoption tax credit so that families who want to adopt a child aren’t blocked from doing it simply because of cost.

State Rep. Rusty Black, R-Chillicothe, nominated Vescovo for House Speaker. Black says Vescovo is focused on helping others and has worked to make a difference for Missourians. Vescovo was sworn-in as House Speaker by Judge Darrell Missey of the 23rd Judicial Circuit Court in Hillsboro. Vescovo and Judge Missey both live in Jefferson County.

Vescovo takes over for Springfield Republican Elijah Haahr, who termed-out of the House after eight years.

During his address, Vescovo also emphasized that he’s committed to working with both sides of the aisle to find legislative solutions to problems.

“I hope my time in the Floor Leader’s office has made it clear that I will work with any member from any party,” says Vescovo. “That will not change when I am Speaker. My door will be open and my time will be yours if and when you need it.”

Republicans control the Missouri House this session 114-47, and they control the Senate 24-10. The GOP has supermajorities in both chambers, and Governor Mike Parson is a Republican.