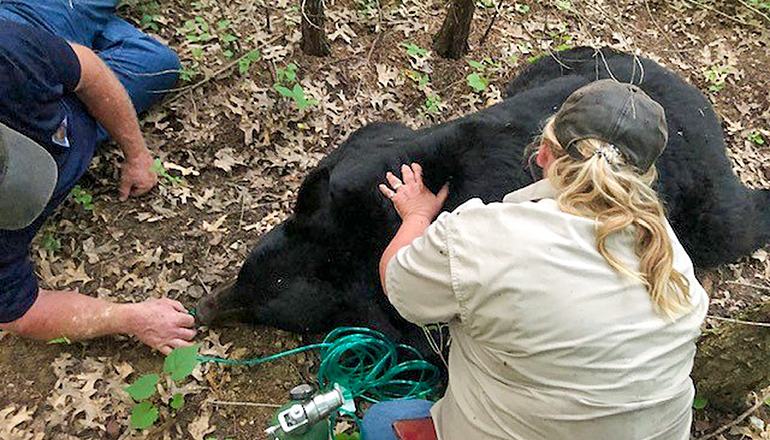 The adult male bear who attracted public attention and was christened “Bruno” by social media has been sedated and transported to suitable habitat outside the urban area, according to the Missouri Department of Conservation.

The bear is suspected to have traveled from Wisconsin, through Illinois, and into Missouri.  He was first spotted in the Show-Me-State near Elsberry on June 30, after which he made his way into St. Charles County.  MDC staff received reports of the bear as he continued to travel through Missouri.

MDC conservation agents say the bear appeared within the city Limits of Wentzville the morning of July 5 and cornered himself just north of I-70 and near I-40/61.  MDC Protection Captain Scott Corley credited the St. Charles County and Wentzville Police Departments for their assistance in the situation and in managing the crowd of more than 400 onlookers who gathered at the scene.

“The bear found itself in a tough spot, stuck by several major roadways,” said MDC State Furbearer Biologist Laura Conlee.  “Due to the proximity to the roadways, coupled with the busy travel day, MDC staff determined the bear had little chance of safely leaving the area on its own. In the interest of public safety and the bear’s safety, MDC staff made the decision to immobilize the bear and transport it to a nearby area of suitable bear habitat outside this urban corridor.”

MDC staff specially trained in wildlife handling successfully sedated the bear.  The bear’s condition was monitored by MDC’s State Wildlife Veterinarian Dr. Sherri Russel. The bear was safely transported to an area of suitable habitat outside the urban area and was released unharmed when he awoke.

MDC does not generally immobilize dispersing bears and will only take this action as a last resort. Given the bear’s location and safety considerations, staff on the scene determined this was necessary and the situation allowed for it to be done.

“MDC thanks local law enforcement for their assistance in managing the large crowd of interested onlookers and for assistance with the bear,” Conlee added.  “Given the bear’s location and crowd, this assistance was critical to the success of this situation.”

Conlee said that although this bear’s movements are a bit out of the norm, bears can traverse large distances and MDC frequently receives reports of bears throughout the southern half of Missouri where MDC estimates there are between 540-840 bears. Missouri’s bear population is growing approximately 9% annually and dispersing bears have appeared in the greater St. Louis area before, a trend that is likely to continue with the growing bear population.

The bear had attracted extensive attention on social media, having multiple Facebook pages created for it and a combined total of more than 120,000 followers.