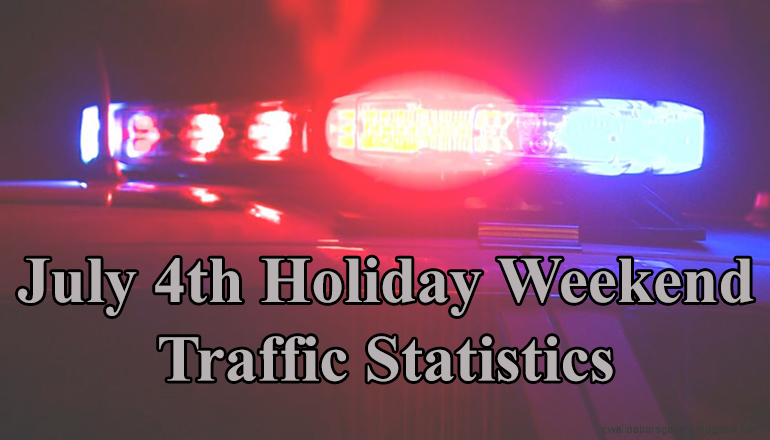 Troopers worked nine boating crashes, which included four injuries and zero fatalities. Troopers made six BWI arrests and 25 drug arrests. There was one drowning over the holiday weekend.

During the 2019 counting period, 15 people were killed and 457 injured statewide in Missouri over the holiday in 1,109 traffic crashes. Troopers arrested 162 people for driving while intoxicated last year. Over the 2019 July Fourth holiday, there were nine boating crashes, which included four injuries and zero fatalities. Three people drowned during last year’s holiday. Troopers made 13 boating while intoxicated arrests during the 2019 counting period.

There were no traffic or boating fatalities or drownings on Thursday, July 2, 2020, during the counting period.

One person drowned Friday, July 3, 2020. Gregory J. Muller, 62, of O’Fallon, Mo, drowned when he was swimming off a sandbar and got caught in an eddy. Muller was not wearing a life jacket. The incident occurred at the 54-mile marker of the Missouri River in St. Charles County. St. Charles Ambulance District personnel pronounced Muller deceased at the scene.

One person died in a traffic crash on Friday, July 3, 2020. Samuel T. Jakubczak, 24, of Troy, Mo, died when another driver failed to yield and the Motorcycle he was operating struck the driver’s side of the vehicle. Jakubczak was wearing a helmet at the time of the crash, which occurred on Missouri Highway J south of Pear Tree Road in Lincoln County. Lincoln County Coroner R. Parker pronounced Jakubczak deceased at the scene. The driver of the other vehicle was not wearing a seat belt at the time of the crash; she sustained serious injuries.

Two people died on Saturday, July 4, 2020. A one-year-old male from Kansas City, Mo, died after being struck by a vehicle. The child was in the roadway at the time of the crash. The crash occurred on Shawnee View Drive in Camden County, Mo. Dr. W.T. Cooper pronounced the child deceased at Lake Regional Hospital. The driver of the vehicle was wearing a seat belt at the time of the crash. He was not injured.

Regino Puente, 63, of Dallas, TX, died when he lost control of the vehicle he was driving, and it ran off the left side of the roadway and overturned. He was wearing a seat belt at the time of the crash. The crash occurred on Interstate 55 at the 33-mile marker in New Madrid County, Mo. New Madrid County Coroner George DeLisle pronounced Puente deceased at the scene. There were two passengers in Puente’s vehicle. One passenger was not wearing a seat belt, was ejected from the vehicle, and sustained serious injuries. The other passenger was wearing a seat belt and sustained serious injuries.

Information about the remaining fatality is being withheld pending notification of next of kin. The crash occurred in Butler County, Mo.