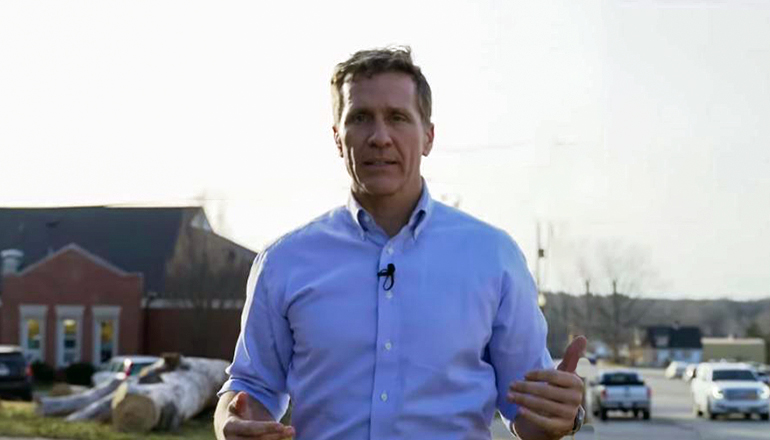 (Missouri Independent) – Attorneys for Eric Greitens’ former campaign manager argued in new filings that the ex-Missouri governor is using the court to buttress his claims of conspiracy, harass his political enemies and boost his campaign for U.S. Senate.

In a newly public filing in the child custody dispute in Boone County between Eric Greitens and his ex-wife, Austin Chambers asked Associate Circuit Judge Leslie Schneider to quash subpoenas for his call logs and text messages sent to AT&T and Verizon.

Chamber’s attorneys, Jennifer Griffin and Kurt Schaefer of Lathrop GPM wrote in the motion that Eric Grietens wants to use the custody battle “as a prop for personal gain in his floundering campaign for United States Senate.”

The phone logs, they wrote, would add nothing to Schneider’s deliberations of the main issue – whether the couple’s child custody case should be moved to Texas, where Sheena Greitens now works on the faculty of the University of Texas.

“Such disregard for this court and the non-parties impacted by (Eric Greitens’) improper discovery constitutes an abuse of the judicial process and should subject (Eric Greitens) to paying the non-parties attorney’s fees and costs of having to respond to such nonsense,” Griffin and Schaefer wrote.

In a separate filing, Sheena Greitens also asked Schneider to quash the subpoenas for the telephone records of Chambers, former presidential adviser Karl Rove, Sheena Greitens, her sister, and one other unidentified individual.

Rove has hired an attorney, David Brown of Columbia, who entered an appearance but has not filed anything available for public viewing Monday.

The motions are among several new filings in the case, which exploded into public view when Sheena Greitens alleged in an affidavit that her former husband knocked her to the ground and took her phone and keys in an April 2018 incident, loosened a tooth when he struck one of their children in 2019 and used psychological control techniques, including threatening suicide, to keep her silent.

Stamper filed a new statement Friday, accusing Sheena Greitens of raising issues that should have been settled before the divorce was final and exaggerating incidents to harm her ex-husband’s reputation.

“There is arguably no more heinous accusation than that of child abuse,” Stamper wrote. “How (Sheena Greitens) wrapped herself in this twisted web, and who may have helped her in its weaving, is subject to pending discovery.”

The former governor is one of 21 candidates running in the Republican primary for the nomination to replace retiring U.S. Sen. Roy Blunt. While he had consistently led in most public polls, recent surveys have shown that his lead has evaporated.

And his two closest rivals, U.S. Rep. Vicky Hartzler and Attorney General Eric Schmitt, on Monday released information from campaign-sponsored polls that showed they, not Greitens, were leading the race.

Hartzler’s internal poll, reported by Politico, gave her a 1-point edge, 23 to 22, with Schmitt in third place. Schmitt’s new poll shows him with a 2-point lead over Greitens, with Hartzler in third place.

In the latest filing, Stamper wrote that Sheena Greitens had an obligation to tell the court about domestic abuse before the divorce was final yet she did not. She claims to have told the court-appointed mediator, Stamper wrote, but if she had, the mediator would have, by law, been required to report the abuse to the state’s Children’s Division.

Greitens has a long list of enemies who he accuses of working to destroy his political career, which found initial success when he defeated three experienced Republican politicians to take the GOP nomination for governor in 2016.

It began unraveling in 2018 when allegations of violent sexual misconduct and an investigation of his campaign finances made him the first Missouri governor to resign under a cloud of suspicion.

Those accusations centered on a 2015 encounter in which he allegedly led a woman down to his basement, taped her hands to pull-up rings, blindfolded her, spit water into her mouth, ripped open her shirt, pulled down her pants, and took a photo without her consent.

In the affidavit she filed on March 21, Sheena Greitens said he admitted to her in late January 2021 that he had in fact taken the photo that resulted in the invasion of privacy charge and threatened legal consequences if Sheena Greitens ever shared that fact with anyone — including family members or a therapist.

The Senate race is Greitens’ comeback bid and he has accused Rove and Senate Majority Leader Mitch McConnell of attempting to undermine his campaign because he has said he will not back McConnell for another term in leadership.

In Sheena Greitens’ motion to quash the subpoenas, attorney Helen Wade wrote that the only issue before the court is whether to move the case to Texas. In it, Wade noted that the legal rules in Texas would bar the court from considering information that could have been revealed in the original divorce case. Missouri court rules do not include that prohibition, she wrote.

In addition, she wrote, all filings in a custody dispute are closed records in Texas to protect the families. In Missouri, Wade noted, all the filings are public unless a judge orders them closed.

“The sole and only reason that Sheena’s Motion and Affidavit setting forth her private and painful experiences were drafted and filed is because Eric refused to allow her to litigate this matter in Texas,” Wade wrote.

The information from phone logs would not result in evidence germane to the case, Wade wrote.

“Eric would like nothing more than to force this court to entertain a mini-trial regarding the conspiracy theories that he has advanced on social media and in the press,” Wade wrote. “However, that is not what our judiciary and its resources are to do.”

Stamper, however, said he finds inconsistencies in Sheena Greitens’ court filings, making contradictory statements in “an ever-changing story about her work with political operatives…”

In her latest sworn statement, where she said she had photos and documentation to back up her claims of abuse, Sheena Greitens denied working with any political operatives on her March 21 affidavit.

“I drafted the previously filed affidavit,” Greitens said in the March 30 filing. “Neither Karl Rove, nor Mitch McConnell, nor any other so-called political operatives drafted it for me.”

Sheena Greitens also said in the latest sworn statement that she did not discuss the affidavit “with anyone other than my counsel until after it was to be initially filed on March 16.”

The first affidavit had no sworn statements about anything but the relationship between Sheena and Eric Greitens. Stamper, however, wrote that the new statement contradicts the only non-sworn public statement Sheena Greitens has made.

“I did not discuss the contents of my affidavit with anyone other than my counsel, and after the affidavit was filed, my immediate family,” she wrote. 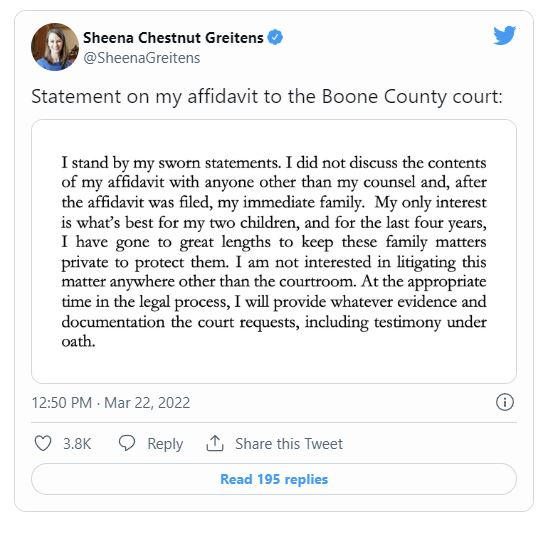 The two statements are not alike, Stamper wrote.

“First she claimed she did not discuss the allegations in (the March 21 affidavit) with any political operative,” Stamper wrote. “Now, in her latest affidavit, she says only that Karl Rove did not write her (affidavit). Similarly, at first (Sheena Greitens)  said she did not work with political operatives. Now, in her latest filing, she claims only that she did not talk with them until March 16, 2022, five days before the allegations became a national story, affording (Eric Greitens) only minutes to respond.”