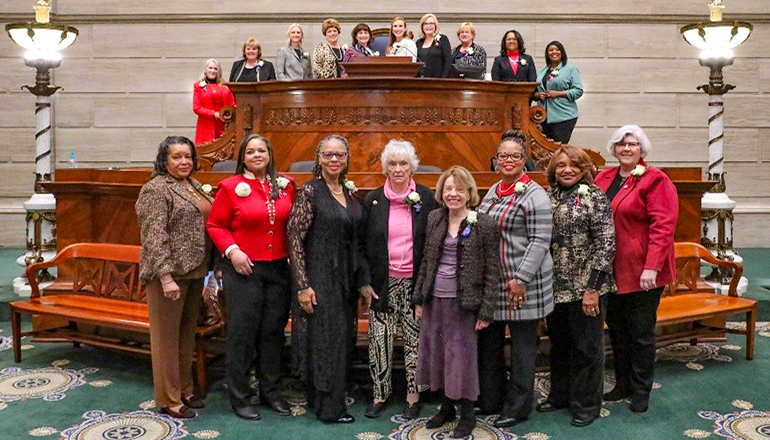 The 11 women in the Missouri Senate have written a new book called “You Can, Too!” to promote literacy across the state and encourage more young people to get civically engaged.

It was not until 1972 a woman was first elected to the Missouri Senate, and in the state’s 200-year history, while there have been more than a thousand men who have held office, just 36 women have served.

Sen. Jill Schupp, D-St. Louis said it is important to make sure young people know they can run for office, but more importantly she urged them to not let obstacles get in the way of whatever their dreams may be.

“At the end of the book, we have what is supposed to be a mirror,” Schupp explained. “It’s not perfect, but because we want, we want the kids who are reading this book to look in it and see themselves reflected in these stories and on this page.”

Schupp noted the main goal of the book is to encourage literacy and is meant for about a fourth-grade reading level, when kids are starting to read to learn, rather than learning to read. She added they are giving copies of the book to libraries, pediatricians’ offices and dental offices, and other places where kids might pick it up and start reading.

Sen. Holly Thompson Rehder, R-Scott County, echoed kids should not let obstacles stop them from achieving their goals. She recounted she dropped out of school at 15 to help care for her family, had her first child at 16, and eventually got her GED and a college degree.

“I never once would have ever thought I would be in the Missouri Senate,” Rehder remarked. “I love when I go and speak to children in my district, it is always been so eye-opening to me to see how encouraging them just knowing my background is.”

Rehder also pointed to surveys showing women legislators are more likely to say they decided to run for office because they were recruited, rather than deciding on their own. And women are also more likely to be discouraged from running for office. Rehder noted when she first ran, party leadership told her it “wasn’t her time.”

“And so we hope by reading so many women’s inspiring stories, that it will help girls to realize they don’t need to ask for permission,” Rehder stressed. “They need to go with their gut and believe in themselves, regardless if anyone else does or not at the time.”

Support for this reporting was provided by The Carnegie Corporation of New York.