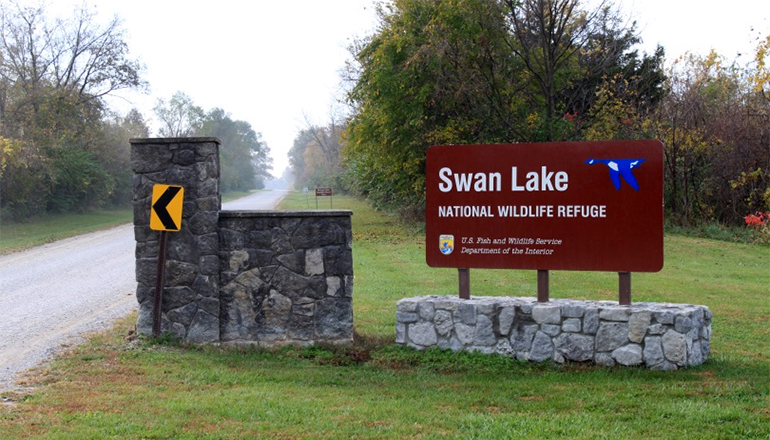 The gates at Swan Lake National Wildlife Refuge will once again open to the public on Saturday, March 2, 2019, at 6 AM.  The Refuge is closed annually from late October to the first Saturday of March to allow for undisturbed habitat for migrating and wintering waterfowl.

Once spring arrives the place becomes a Refuge for people as well as wildlife. Whether it’s fishing, bird watching, a relaxing drive or a hike through the woods, Swan Lake National Wildlife Refuge is a place for everyone to enjoy.  There are an abundance of outdoor public use opportunities at Swan Lake National Wildlife Refuge.  The 2,000 acre Silver Lake is open to fishing and the Auto Tour Route provides for a relaxing drive.  There are also plenty of hiking opportunities available, as the entire refuge is open to foot traffic during this time.

Additionally, there is a nature trail by the Visitor Center with a nice overlook and scopes near the Swan Lake marsh.  The refuge is open to antler shed hunting, mushroom and berry picking for personal use.  The Visitor Contact Station houses many exhibits along with other information about the Refuge.  It is open to the public when staff is available. The Visitor Contact Station will also be open on weekends beginning in April through the fall.  If interested in volunteering please contact Refuge Manager Steve Whitson at (660) 856-3323 ext 13.

At this time there are great wildlife viewing opportunities as there are hundreds of Trumpeter Swans on the refuge and snow goose numbers can reach in the hundreds of thousands this time of year.  March and early April good times to view lots of different species of waterfowl that are migrating back north for the summer.  An early morning or late evening drive through the refuge is a good time to see whitetail deer.  Mid-April through May provides great viewing opportunities in habitat mudflat areas for the many species of shorebirds that stop over at Swan Lake NWR on the migration routes.