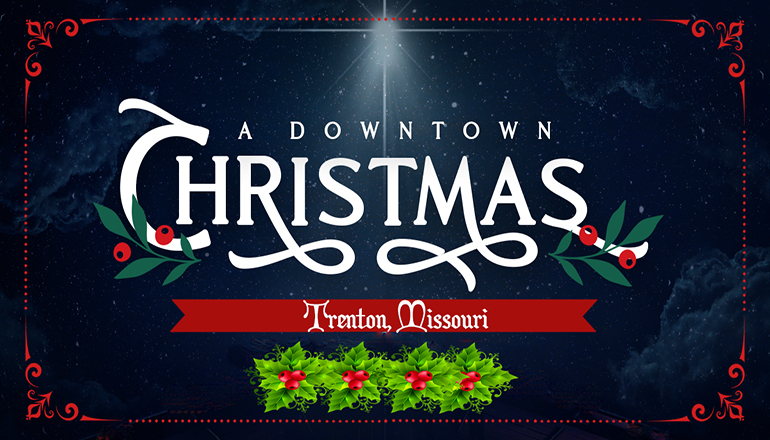 A variety of activities will be held during Trenton Downtown Christmas on Saturday of next week.

Five Points Alive sponsors the activities December 14, 2019, which starts with a soup supper at the VFW Hall. Sena Arnold with Trenton Downtown Christmas and Five Points Alive says serving will begin at 4 o’clock that afternoon. Those attending can receive a bowl of soup, crackers, dessert, and drink for $5.00.

Golf carts, ATVs, vintage cars, horses, trucks, and businesses can line up for the Downtown Trenton Christmas Parade in parking lot H on the North Central Missouri College campus near Geyer Hall starting at 4:45. Entries do not need to preregister, but spokesperson Cindy Jennings says it is nice to know how many entries there will be.

There is no fee to enter the parade, but waivers have to be signed and entries are asked to be decorated, and candy can be brought to distribute on the parade route. Spokesperson Cindy Jennings says the parade will begin at 5:15, and there will be prizes for first and second place. The parade will travel on Main Street, turn at Five Points, make a U-turn at Trenton Hardware, go past Lucky Dog Embroidery, go down the hill by the Grundy County Museum, turn between the Trenton Municipal Utilities parking lot and the Grand River Christian Bookstore, and go back to Main Street. The parade will travel the route twice.

An opening prayer will be held at Sesquicentennial Park at 5 o’clock, and Mayor Linda Crooks will help with the lighting of the park. Arnold says children can get their pictures taken with Santa at the gazebo after the parade. There will also be children’s crafts and a cookie walk at The Space, hot cocoa and cider for sale at the Main Street Mercantile as a fundraiser for Preceptor Nu Sorority, and Cooksey’s Kettle Corn will sell items at the flagpole.

Various performances will also take place at the flagpole on December 14, including the Mic-O-Say dancers at 5:45, Midwest Synergy dancers at 6:15, the Rissler Grade School Honor Choir at 6:45, Superstars dancers at 7:15, and the NCMC Dance Wave at 7:45.

Silent Night will be sung at the flagpole at 8 o’clock and carolers will be entertaining the crowd throughout the event, church and other groups can join in with the caroling.

The Trenton High School Bulldog mascots will also be involved with Trenton Downtown Christmas. Performances will be held at the Grundy County Jewett Norris Library if there is inclement weather.