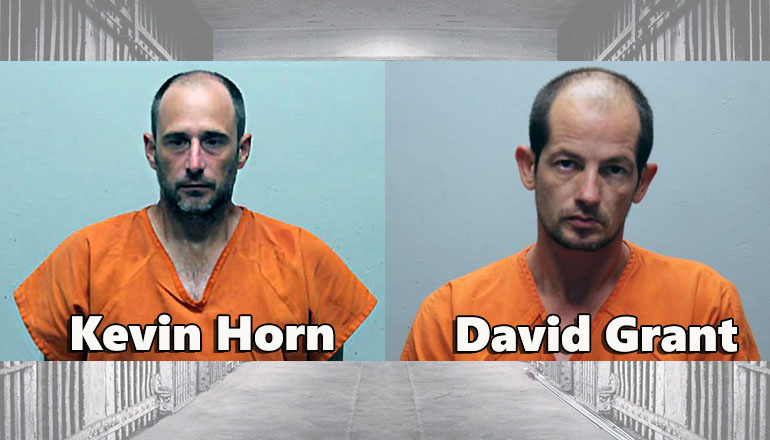 Two Independence men face charges in Daviess County after an alleged burglary the morning of August 14.

Thirty-nine-year-old David Alan Grant has been charged with the felonies of possession of a controlled substance, attempted second-degree burglary, possession of burglary tools, first-degree property damage, and driving while revoked or suspended. He also faces misdemeanor charges of unlawful possession of drug paraphernalia involving a prior drug offense and failure to drive on the right half of the road when the road was of sufficient width. Grant’s bond was denied.

A probable cause statement from Daviess County Deputy Riley Christensen reports law enforcement was dispatched to the Wall Street Station in Altamont in reference to a security alarm. Christensen observed someone jump out of the front passenger seat of a vehicle and run into a cemetery.

After a vehicle stop, the driver identified himself as Loren Edward Grant. Investigation revealed he was actually David Alan Grant, and he was operating the vehicle with a suspended driver’s license.  He was arrested on an outstanding warrant. Christensen says a transparent syringe was found on Grant’s person, and the contents were found to contain methamphetamine. The probable cause statement notes an inventory search was conducted of the vehicle, and burglary tools were found as well as a scale with a white powdery substance.

A probable cause statement from the Highway Patrol reports Daviess County Central dispatch advised the Patrol of a suspicious person at the Winston High School with a blue duffle bag later in the day. Law enforcement found the man in a storage shed near the back of the school, and, after a short foot pursuit, he was taken into custody. The man was identified as Horn.

The probable cause statement accuses Horn of having a baggy of a crystal substance and a glass smoking pipe containing a white powder residue. The duffle bag reportedly had a Kel-Tec nine-millimeter handgun with a loaded magazine, tools, and a trail camera. The serial number on the gun was said to be defaced. There was also an apparent forced entry into the shed.

Grant and Horn have a criminal history.