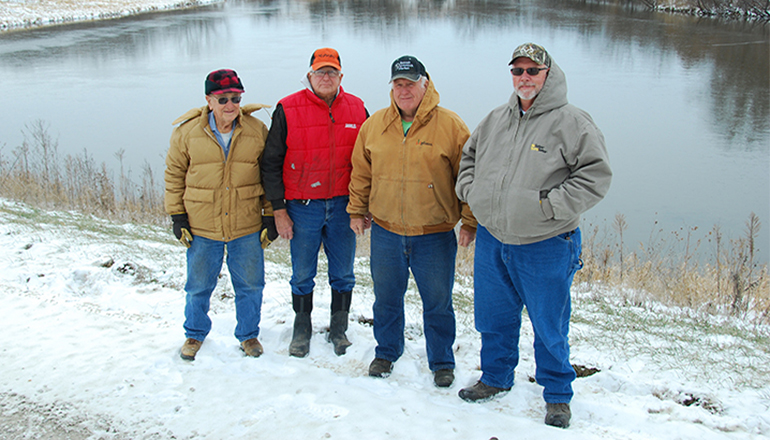 Sixty years after the first of 1,182 flood-prevention structures were built in Missouri with federal financial and technical assistance, landowners who have witnessed the before-and-after effects of heavy rain are still praising the benefits of the watershed projects.

“Panther Creek used to flood almost every time it rained, but it hasn’t flooded at all since they put the structures in, including 1993,” said John Meek, who farms near Ridgeway in Harrison County.

Twelve structures were constructed in the Panther Creek Watershed in the 1970s. A watershed is a land area that drains to a common point, such as a creek or river. Panther Creek is one of 35 Missouri watershed projects, mostly in northern Missouri, that were planned and at least partially completed by the USDA’s Natural Resources Conservation Service (NRCS). The watershed projects were authorized by the Watershed Protection and Flood Prevention Act (Public Law 566) passed by Congress in 1954.

Congress halted funding for the program in 2010 before all the planned projects could be completed. Congress restored some funding in 2017, which is allowing construction of two larger structures in Missouri that will create reservoirs large enough to provide water supply and recreation in addition to flood reduction. They are the 344-acre Little Otter Creek Reservoir in Caldwell County and the 2,352-acre East Locust Creek Reservoir in Sullivan County. Three other water supply structures also were built in Missouri before funds dried up in 2010. However, most of Missouri’s watershed structures constructed during the program’s peak years are strategically placed “ponds” with dams designed to capture runoff and hold it back until it is released slowly through a principal spillway pipe in the dam.

“The project goals are not to completely eliminate flooding, but to the reduce the severity of flooding and to lessen the negative economic impact of flooding,” said Marty Comstock, NRCS state conservation engineer. “The estimated annual benefits of the 1,182 structures is $27 million.”

“These structures became part of the rural stormwater infrastructure,” added Clif Baumer, an NRCS environmental engineer in Columbia. “A certain number of them were necessary to have the positive impact we were hoping to achieve. We tried to get 30 percent of a watershed protected by structures. We knew from the scientific research that they would work, but the best measure we have of their success is mostly anecdotal.”

The anecdotes continue to pour in.

“The biggest problem we had before the structures were installed was flash flooding that destroyed the corn crops,” said Bryan Cox, who farms near Bethany in the West Fork of Big Creek watershed and is a member of the watershed board. “Since the structures went in, everyone has been able to maintain some type of crop rotation without losing a crop every year or two.”

Cox said the positive impact of the watershed structures has been evident in communities as well as on farms.

“Some of the bridges in Harrison County would only last three or four years because of the floodwater washing around the abutments, but the water doesn’t do near the damage as it did before. These dams have saved the county a lot of money,” he said.

Flood-damage-reduction structures were designed to last 50-100 years. To reduce sediment accumulation, land treatment practices are applied in the watershed to reduce soil erosion to acceptable levels.

Baumer said that even though some of the oldest structures are nearing the end of their design life, they will provide flood benefits much longer than that.

“That design life was really based on how long we estimated it would take for sediment to fill the reservoir, but they will still function even when they fill in because of the height of the dam above the principal spillway,” he said.

Baumer said the structures provide other benefits as well, including fishing, wildlife habitat, aesthetics, and increased property value. At the request of landowners, livestock-watering tanks could be added to the base of dams. And some structures near roadways were fitted with dry hydrants that allow fire departments to refill tanker trucks without having to drive back to town. That aids in fighting rural fires and can lower homeowner insurance rates.

Landowners who have structures located on their property have provided land rights that allow the watershed district to enter the property and maintain the structures. Maintenance usually involves removing trees from dams and clearing clogs in drain pipes.

Bueford Cooper, a 96-year-old farmer at Ridgeway, remembers how bad conditions were in the watershed before the structures were built.

“I had some ditches that were so deep that you wouldn’t dare get down in them and try to get out. But I put the structures in and now you can walk across (where the ditches were). It’s beautiful,” Cooper said.

Cooper said he added some structures on his own.

“I wanted one on every ditch,” he said. “Sometimes I couldn’t get cost share, but I built them anyway because it helps everyone.”

“It has been very satisfying for me to work on these projects because they sure have helped,” he said.