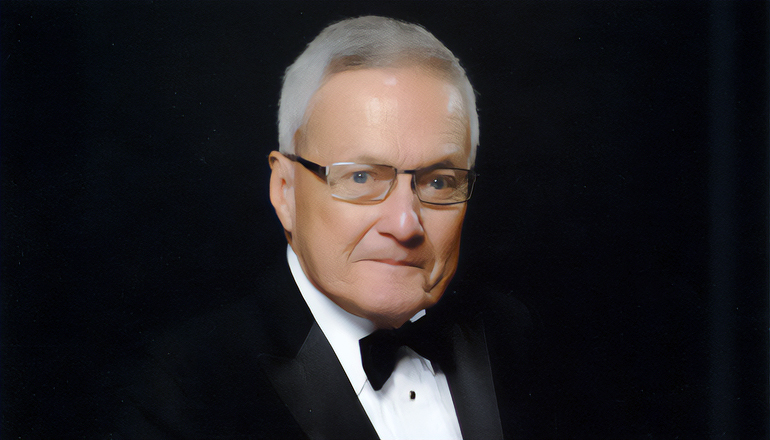 Born April 3, 1944, in Marshall, he was the son of the late Jim Hannaford and Lela Hannaford. He graduated from Marshall High School, and later from Missouri Valley College with a Bachelor’s in Music Education. His Master of Science in Music Education was earned from Central Missouri State University…now the University of Central Missouri. Additional credits were received from Northeast Missouri (Truman) State University, Northwest Missouri State University in Maryville, UMC, UMKC, UMSL, and the University of Wisconsin-Whitewater. Buddy started his music career in the Adrian R-III Public Schools where he taught vocal music grades 1-12 and instrumental music grades 5-12. After two years there, and until his retirement in 1997, he was Director of Instrumental Music in the Trenton R-IX School District where his teaching assignments included Band grades 6-12, Music Appreciation, and Music Theory for juniors and seniors.

On July 27, 1968, he married Karla Allison, his childhood sweetheart. He is survived by Karla, an aunt, eight cousins, and several second and third cousins.

Current professional memberships include the National Band Association, National Association of Music Educators, Missouri Music Educators Association…where he was on the Board of Directors Advisory Council as Retired Members Chair (a position he held since 2004), Missouri Bandmasters Association, and Phi Beta Mu…International Bandmasters Fraternity. Buddy judged marching and concert band contests and festivals and was an instrumental music clinician in Arkansas, Kansas, Iowa, Missouri, and Oklahoma. He continued to be active within the music education profession until recently.

Buddy received numerous awards and honors, including being named in multiple editions of Who’s Who Among America’s Teachers and also Outstanding Young Men of America, Key to the City of Trenton in 1986, 1987 Missouri Valley College Outstanding Alumnus, 1991 Trenton Area Chamber of Commerce “Above and Beyond” Award for service to Education, 2017 Pillars of the Community Award, and in 2021 the Butch Antal Service Award to music education and MBA. The Trenton Band under his direction received national recognition during the 1980s and 1990s and consistently received top ratings at the district and state-level large ensemble and solo and small ensemble festivals.

Buddy was a charter member of the Marshall Philharmonic Orchestra, for 59 years. Buddy is a past member of the Trenton Area Chamber of Commerce, past President of the Grundy County Friends of the Arts, and a member of Crescent Hill Lodge #368, Adrian, MO. He was a member of the Marshall First Christian Church (Disciples of Christ) where he served as a deacon, elder, and past board chair. He founded and managed the Missouri Day Marching Festival during its nineteen years of existence…from 1997 until its dissolution in 2015. He was one of the founders of the Grand River Valley Choir and Orchestra and conductor of the GRV Orchestra.