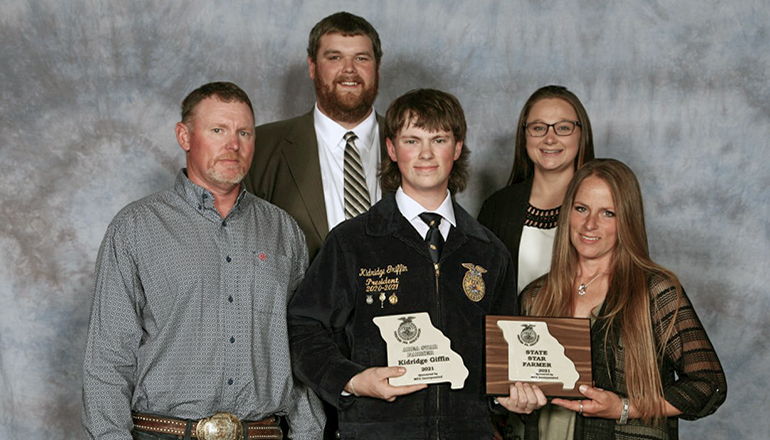 The Missouri FFA Association recognized Kidridge Griffin of the Trenton FFA Chapter as the State Star Farmer at the 93rd Missouri FFA Convention. His parents are Ethan and Amanda Griffin of Trenton. His advisors are Kabel Oaks and Sadie Roy.

The State Star Farmer is chosen based upon outstanding production agriculture in the student’s supervised agricultural experience program and active participation in FFA.

Griffin’s SAE consists of multiple ownership enterprises, including his cow-calf operation. He started with an eight-cow operation and has expanded to 70 cows and two breeding bulls. Griffin typically backgrounds his calves to 700 lb. and markets them through sale barns in northern Missouri and southern Iowa. In addition, this past year, Griffin rented 104 acres for soybeans. He markets around 20 acres of corn locally and through Cargill, Kansas City. For his equine science SAE, Griffin maintains two horses and competes in team roping.

After graduating high school, Griffin’s plans include attending North Central Missouri College, Trenton, to study agriculture and natural resources, crop production, and livestock management. Griffin said he plans to return to his family farm while expanding his own cattle and row-crop operation.