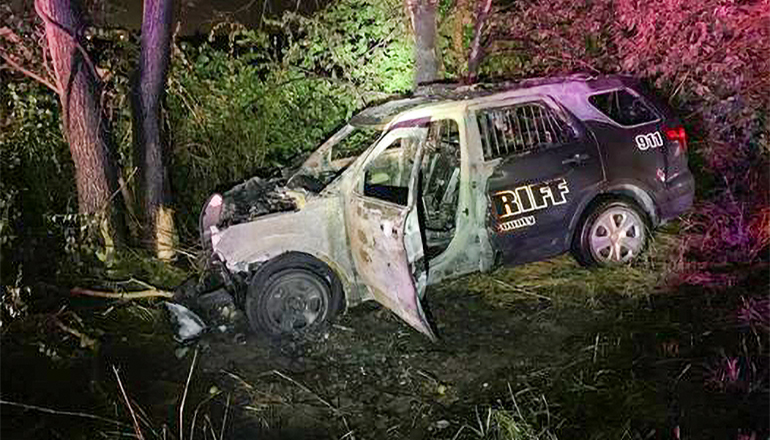 When the deputies approached the vehicle, the driver fled at a high rate of speed. During the brief chase, the suspect vehicle and deputy’s vehicle went off the roadway at a curve in the roadway north of East 155th Street on South Prospect. The suspect vehicle struck a tree and came to rest in a field a short distance from the roadway. The deputy’s patrol car also struck a tree sustaining heavy damage and catching fire. A second deputy arrived on the scene shortly after the crash and pulled the deputy to safety from the burning car.

Officers from Belton Police Department, Grandview Police Department, Kansas City Police Department, and Missouri State Highway Patrol responded to the scene to assist and secure a perimeter of the area. A search of the field aided by a Cass County K9 Team and FLIR equipped UAV from the Sheriff’s Office located the suspect hiding near the crash scene around 12:30 am.

Grandview and Kansas City Fire Departments arrived on the scene to extinguish the fire and treat the deputy, and suspect. The deputy was transported to an area hospital in serious but stable condition and remains hospitalized.

The suspect, identified as Charles F. Rice, 36, of Kansas City, Missouri, was treated and released from the hospital is currently in custody on the following warrants:

Charges from this incident are pending as the Missouri State Highway Patrol continues investigating the crash.