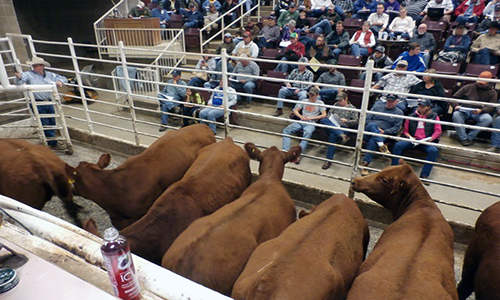 Show-Me-Select replacement heifers sold for $1,672 average on 190 head. The sale at Joplin Regional Stockyards was the first of six sales across Missouri this fall.

This year’s price topped a $1,586 average from one year ago, says Eldon Cole. The University of Missouri Extension livestock specialist, Mount Vernon, manages the sale.

At the Nov. 15 sale, 78 of 190 head sold went across state lines. The top sale price of the night was $2,100 each on four Red Angus-Simmental cross heifers. They came from Sam Schaumann, Billings, going to Sammy Helm, Pineville. He took home eight heifers. The second high single lot price of $1,900 went to John Wheeler, Marionville. They went to Tom Jeffries, Carthage. Wheeler, a consignor since the beginning of Show-Me-Select, sold all his black baldies for an average of $1,746.

The sale showed a shifting in consignments. There were more red cattle offered. And the crossbreds did well. To Decker, this shows a growing interest in the genetic value of heterosis of crossbreeding.

A growing trend of favoring AI-bred heifers continues. The AI-bred heifers averaged $1,704, compared to $1,630 for the bull-bred. This $74 spread is less than usual, Cole noted. Both Cole and Decker said bidding stayed stable, mostly near the final $1,672 average price.

The next sale is Friday, Nov. 22, at Kirksville nearer to Iowa.

The average price of $1,642 should not have been a surprise to Eldon Cole. Over the past two decades, he developed a formula on the bred heifer prices. They go for twice the price of certain kinds of 550-pound steers. Those steers last week brought $832 per head. Multiplied by two, that gives $1,664—not far from heifers at an average of $1,672.