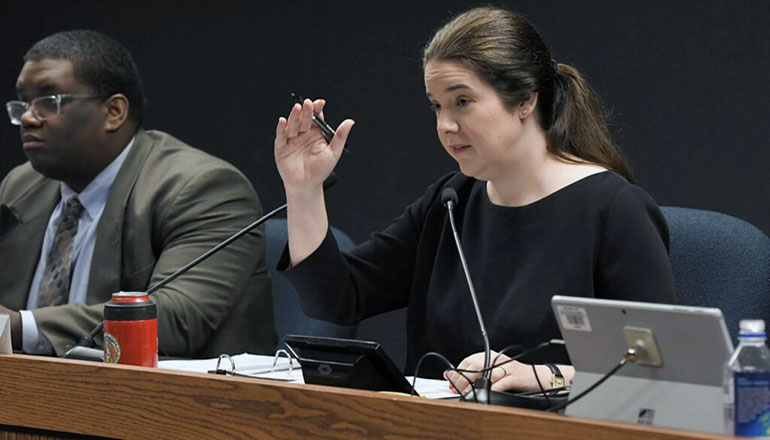 (Missouri Independent) – With a change of just a few words, a bill to expand the sales tax exemption for food purchases became a bill virtually ending the exemption, infuriating its sponsor and forcing a Missouri House committee to give it another look.

On Monday, the House Rules – Administrative Oversight Committee voted to send state Rep. Mary Elizabeth Coleman’s bill back to the Ways and Means Committee. That will delay any potential House action on the bill for at least two weeks.

“I didn’t even get a chance to see his amendment until it already had been voted on,” Coleman said in an interview about changes made to her bill. “And immediately, when I saw it, I was horrified at what was happening because if you just read the amendment, I don’t think you would immediately know, oh, this is a sales tax increase.”

Coleman said after the Rules Committee vote that she would seek a quick Ways and Means vote. But no hearing of that committee has been scheduled.

The reason the bill, originally a $144 million tax cut, became a $416 million tax increase is because an amendment offered by Rep. Shane Roden altered the list of foods exempt from a portion of the state sales tax.

Instead of exempting any food that can also be purchased with food stamps, known formally as the Supplemental Nutrition Assistance Program, Roden changed it to only foods eligible for purchase under the WIC, or Women, Infants and Children program.

During the Feb. 22 committee debate, Roden said he didn’t want to exempt purchases of junk foods. He acknowledged he had not spoken to Coleman about the amendment.

“This would take it down to the nutritional, value foods only,” Roden said during the hearing, adding that he didn’t want the exemption to apply to a “frozen burrito” or “doughnuts at the gas station that should not be exempted from the sales tax.”

Instead of limiting the new exemption, however, Roden’s amendment would end the long-standing exemption for food purchases from the 3% general revenue sales tax.

How far the bill could have gone without the new delay is questionable. The tax targeted by Coleman is the 1% sales tax dedicated to public schools. A cut in revenue equal to the revenue from food sales would cost every school district in the state about $160 per pupil.

“We understand that prices have increased, but so have prices increased for schools,” Doug Hayter, executive director of the Missouri Association of School Administrators, said in an interview. “We need to keep what we have in place. If we continue to decrease revenue, we will be in a very difficult position.”

The school administrators spoke against the bill in a Feb. 9 public hearing.

The exemption was enacted in 1997. It is tied to the food stamp program because federal law prohibits any sales tax on purchases made with benefits and grocery computers were programmed to exclude those foods from tax.

The other 1.225% is split to give 1% to public schools, 0.125% to the Department of Conservation, and 0.1% to state parks and soil conservation. Retailers also charge all local sales taxes on food purchases.

The 1% tax is also known as the Proposition C sales tax because of its ballot name in the 1982 election where it was passed. It brings in about $1 billion annually and is divided equally among school districts on a per-pupil basis. In the fiscal year that ended June 30, each district received $1,046 per pupil.

It is separate from the $3.6 billion foundation formula — which distributes funds based on a number of factors, such as poverty and school district size — that determine the actual per-pupil aid received by each district.

One of the selling points of Proposition C was that half of the new revenue received by each district would be used to cut local property taxes. Over the 40 intervening years, most of those savings have gone back to the schools, either through the application of minimum levy laws or local votes to waive the tax rollback.

Fewer than 10% of districts have a tax rate that includes the rollback, Hayter said. That means if Coleman’s bill passes, it will be lost money for most districts.

“There really is no way to offset or recoup the revenue,” he said.

Coleman, however, said her bill is intended to offer relief at a time of rising prices and that the money can be made up in other ways through the budget.

“The Republican majority while I have been serving has always been committed to funding our schools at the highest of levels and the highest of priorities and I don’t think that decreased funding in one fund is going to decrease overall our funding mechanism to the schools,” Coleman said.

The school administrators were the only education group to appear for the public hearing in opposition to the bill. The silence doesn’t mean support, said Otto Fajen, a lobbyist for the Missouri National Education Association.

“Our folks have a resolution to maintain adequate resources for public schools,” Fajen said, “but we also have some concerns about the fairness of taxation.”