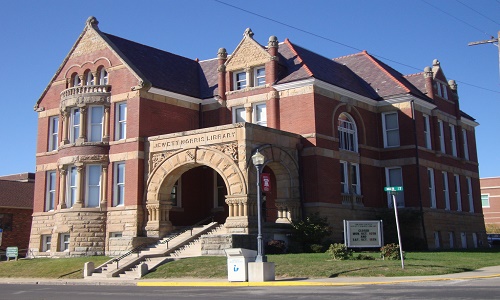 Grundy County Jewett Norris Library Director Theresa Hunsaker says a lot has been done at the library in Trenton since it was closed due to the pandemic and now that it has reopened.

One of those things was replacing elevator boards, which took about six weeks and another was the addition of curbside service, which Hunsaker calls “a big hit.”

She says returned books are cleaned, and computers are cleaned after someone has used them.

A new backlit sign has been put outside. A new dropbox is also out front of the library, which Hunsaker says protects the books better than the previous dropbox. She notes those two items were made possible by donations.

The Friends of the Library also donated funds for a bench in front of the library in memory of Twyla Keuhn.

Hunsaker says the Grundy County Jewett Norris Library has added a 3D printer, and staff is learning how to operate it. Cricut and die-cutting are also available.

The library has access to two ebook consortiums. It plans to join Hoopla where people can download movies, books, and music for a certain amount of time.

Hunsaker reports the library’s microfilm collection has been digitized, and it is online. She explains any Grundy County newspapers that are on microfilm can be accessed.

The library has a genealogy section, and Hunsaker says there have been a lot of donations for it recently. She comments a lot of people stopped coming for genealogy due to COVID-19.

There is also a Friends of the Library newsletter. Donna Sue Jackson is the editor.

She says the newsletter includes library news and her opinion on books. She encourages people to send her an email if they come across a new author or book that has a special meaning to them, so she can include it.

Jackson notes that individuals who signed up to receive the quarterly newsletter by email will get it faster than those who have not registered to get it that way.

Friends of the Library members can provide their email addresses when joining the group. Jackson’s email address is included in the newsletter.

The Grundy County Jewett Norris Library of Trenton is preparing for its summer reading program.

Library Director Theresa Hunsaker says staff will send out letters to businesses asking them to donate for prizes.

She hopes the community supports youth continuing to read.

Hunsaker adds that Oceans of Possibilities is the theme of this year’s Grundy County Jewett Norris Library’s summer reading program.