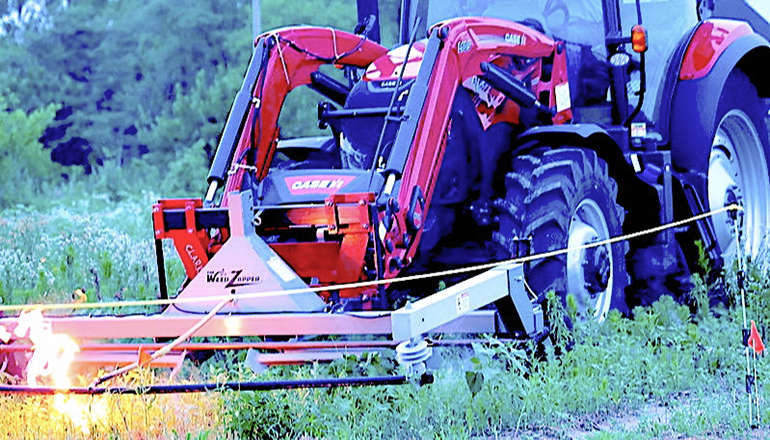 Move over, herbicides. There’s a new sheriff in town. And he’s toting some powerful guns loaded with electricity to kill weeds.

This shocking new method of weed control was demonstrated at the 2021 Pest Management Field Day at the University of Missouri Bradford Research Center in Columbia.

It is of special interest to Bradley because it might be the answer to Missouri’s growing waterhemp problem. A prolific producer of seeds, waterhemp is Missouri’s No. 1 weed problem and one of 14 herbicide-resistant weeds.

Two brothers in Illinois with backgrounds in farming and engineering designed The Weed Zapper machine. A different pair of brothers purchased the technology and manufacture Weed Zappers at a plant in Sedalia, Missouri.

Metal wheels are grounded, and booms adjust to different heights. Tractor speed is about 2-4 miles per hour, Bradley says. Weed kill is best at lower speeds and is even more effective on some of the more challenging weeds when used at seven-day intervals in late summer.

Schreier’s data shows that by the end of the season, there is almost complete control of giant ragweed, common ragweed, marestail, and waterhemp. It is slightly less effective on grasses.

In addition to killing weeds, electrocution also affects the viability of surviving weed seeds. The most impact is seen in waterhemp, where about 65% of seeds become nonviable.

Electrocution is not new to the weed management world, says Bradley. Sugar beet growers in North and South Dakota have been trying this method since the 1950s and 1960s.

The United Soybean Board, Missouri Soybean Merchandising Council, and the Weed Zapper company are partners in this project.