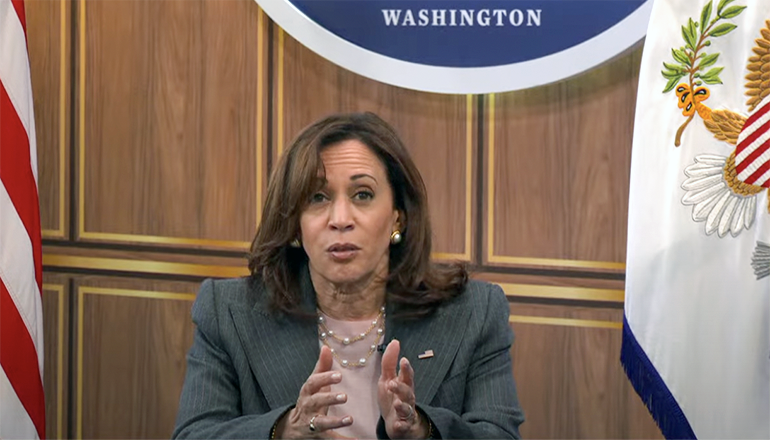 Vice President Kamala Harris met with abortion providers from Missouri and other restrictive states Thursday to consider ways the Biden administration can protect and expand access to the full scope of reproductive health care.

Even before the leaked draft opinion indicating the Supreme Court intends to overturn Roe v. Wade, Missouri has had among the most barriers to accessing abortions. For instance, there is only one abortion clinic because of state regulations.

Last week Harris presided over the vote in the U.S. Senate on the Women’s Reproductive Health Act, which would codify Roe v. Wade, but Sen. Joe Manchin, D-W.Va., and all the Republicans in the Chamber voted against it.

Michele Landau, board president of the Missouri Abortion Fund, said because states including Missouri already have been navigating barriers to care, there are some systems in place. She emphasized the National Network of Abortion Funds has more than 90 members across the country, already working to provide financial assistance, transportation, child care, and logistical support. “And we’re all part of an ecosystem that we all work together,” Landau pointed out. “I would just suggest that folks join their local abortion fund, lift up their local abortion funds and contact them to see how they can best assist in their work.”

Landau added states which are more friendly to abortion rights have been making it clear, that patients are welcome if they need to come and access care.

Illinois protects the right to abortions but is surrounded by states intending to restrict or ban abortion if and when Roe is overturned. She noted just last week, an abortion clinic in Tennessee, CHOICES, announced it would be opening a location in Carbondale, Illinois, not too far from the Missouri border.