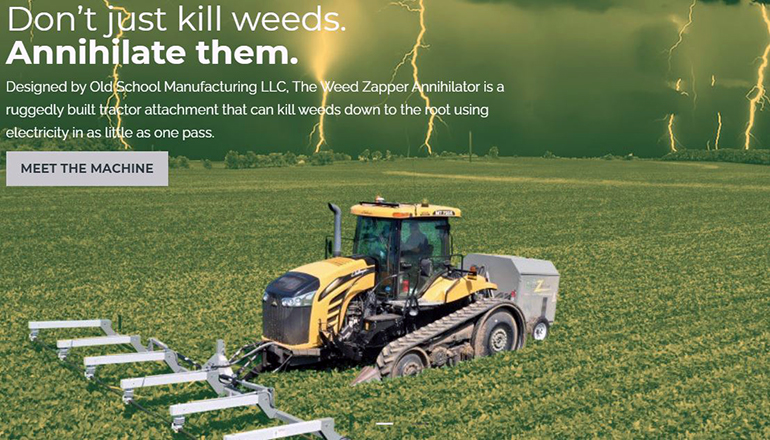 If it’s a weed, spray it. That’s the mindset that most in the agriculture industry held for years, however, that thinking no longer works as more weeds become resistant to herbicides, says Kevin Bradley, University of Missouri Extension weed scientist.

Bradley uses waterhemp as an example. Waterhemp is one of 14 herbicide-resistant weed species in Missouri. It is a prolific producer of seeds, and Bradley considers it Missouri’s most worrisome weed.  “It’s clear that we need a new approach,” he says.

MU Extension researchers are looking at how to remove weeds without herbicides. One nonchemical method is electrocution. The Weed Zapper, made in Sedalia, Mo., is used mostly in organic operations, but it may also work in conventional pasture and row crops. Mizzou has used the Weed Zapper on test plots and saw 98.6% effectiveness in waterhemp destruction.

The Weed Zapper’s copper boom attaches to the front of a tractor and hits weeds with 15,000 volts of electricity from a 110,000-watt generator on the back of the tractor.  Bradley notes that the Weed Zapper can be dangerous because of its voltage. It also can have a negative effect on soybean yield if a lot of the foliage is contacted by the boom in later growth stages.  Its effects are immediate and deadly, especially on larger weeds. It works best when used at seven-day intervals rather than in a single pass.  It is most effective on waterhemp, ragweeds, horseweeds, and cocklebur. It is less effective on foxtail and barnyard grass.  “It’s not a silver bullet, but it is very effective on several of our most troublesome weed species,” Bradley says.

Another option is the Seed Terminator. This seed control tool attaches to the back of a combine. Its dual hammer mills crush the chaff through stationary and rotating bars to make it nonviable.

Bradley says there is a need for more research to understand how new technologies can best reduce weeds in U.S. soybean. Seed destruction is popular in Australia but not widely used in the U.S.  Weeds such as waterhemp, Missouri’s No. 1 weed, can exit the combine in areas such as the header and grain tank. In fact, Bradley says about two-thirds of the seed goes out the back of the combine. Multistate studies are underway to look at how to reduce the number of seeds making it to the soil.  It might take several seasons of use to see substantial reductions, Bradley says.  Most seed that goes through the combine, even pinhead-sized waterhemp and palmer amaranth seeds, becomes nonviable.  Increased engine load on the combine raises fuel consumption an average of 4.1 gallons per hour.

Graduate students Travis Winans and Haylee Schreier work with Bradley on the research.