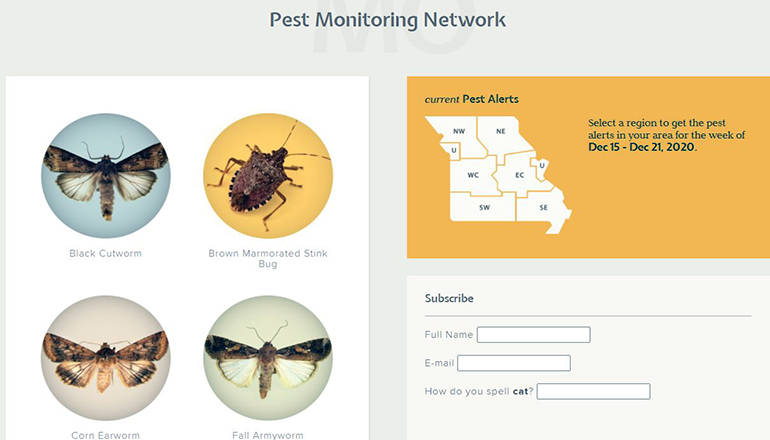 University of Missouri Extension field crop entomologist Kevin Rice says Missouri soybean and corn growers should be on the lookout for growing populations of yield-robbing insects in 2021.

Soybean gall midge larvae feed internally in the base of soybean stems and disrupt water and nutrient uptake. In large numbers, the midge makes stems become brittle and break at the base, says Rice.

There are currently no management recommendations. Seed treatments appear ineffective since larvae are active after the V2 growth stage.

Another insect to watch for is the Dectes stem borer, a small, gray, long-horned beetle that attacks soybean and wild host plants. Its damage lowers yields and increases lodging of weakened plants.

Adult beetles emerge in late June to early July. Newly hatched larvae are creamy white, darken as they mature, and have an easily identifiable orange-red head. They reach 1/2-5/8 inch in length.

After hatching, it feeds on the outer stem before boring into the main stem. The petiole wilts and falls, leaving a scar around the entrance hole. The damage reduces the plant’s ability to take up water and nutrients to developing seeds and pods.

In late summer, larvae move to the base of the plant about 2 inches above the soil surface. It plugs the stem with the frass to make a place to overwinter. This can cause lodging.

Damage occurs most in no-till soybean plantings. It also feeds on weeds in and around the field.

Scout in late July through August by looking for emerging adult beetles and lodged plants. Cut open the stem to look for damage.

There are no labeled insecticides for control.

The borer strongly prefers sunflower over soybean. Rice and his research team began trials to plant sunflowers along soybean field edges to attract the borer, but trials were disrupted due to COVID-19.

Stipends and seeds are available for those who would like to participate in 2021 trials. Contact Rice at [email protected].

Continue scouting for Japanese beetles, Missouri’s No. 1 soybean pest, Rice says. Populations continue to grow for this beetle. Japanese beetles made their first appearance in Missouri in the 1930s, in St. Louis, but they were not found in large numbers statewide until 1999.

Based on 10 years of trapping data, the population grew exponentially, except in 2019. Drought in 2018 reduced numbers. In 2020, Rice recorded double the 2019 numbers.

Researchers have learned several things about Japanese beetles in Missouri. Floods and cold weather do not deter their spread, but drought does. There is only one generation per year, but they live a long time and move frequently.

The tachinid fly and the wasp Tiphia Vernalis are natural predators. Entomologists confirmed the wasp’s presence at Meramec State Park in 2017 and 2018. It likely will spread throughout the state and may provide the best hope of reducing Japanese beetle populations.

Rice continues to test parethroid attract-and-kill nets as a control measure. He places treated nets at the edge of soybean fields.

Beetles die almost immediately after landing on the net.

Rice continues to study how to reduce the size and proximity of nets to lower costs. His research involves catching, painting, and releasing beetles and then tracking them to measure flight patterns.

This voracious eater is on the move in Missouri. It has spread throughout the state since it was first reported in Missouri in 2013. Rice received many new reports in 2020.

It scars seeds and flattens soybean pods. In large numbers, it results in “stay green syndrome” in soybean and reduces yields.

This edge species overwinters in deciduous woods but also seeks shelter in homes and sheds during its early stages.

The MU Extension publication “Brown Marmorated Stink Bug in Midwest Field Crops” is available for free download at THIS LINK.

Learn more about the management of BMSB at THIS LINK.

Infestation can be spotty and happens quickly, so scout frequently, says Rice. This yellow aphid gathers on stems and leaves and reduces yields.

The MU Integrated Pest Management program has more information on insect pests in Missouri on THIS WEBSITE.