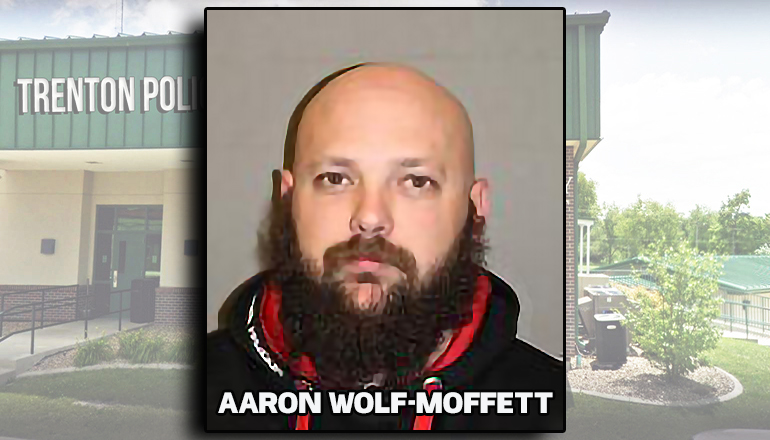 A Trenton man faces multiple felonies after he allegedly shot someone in the leg at a residence in Brimson on February 11th. The Grundy County Sheriff’s Office reports 32-year-old Aaron Zackary Wolf-Moffett has been charged with second-degree assault, armed criminal action, unlawful possession of a firearm by a dangerous felon, and two counts of first-degree endangering the welfare of a child involving a first offense and no sexual conduct.

Wolf-Moffett was arrested on March 1st and is to be held without bond. He is scheduled for the Associate Division of Grundy County Circuit Court on March 8th.

Court documents accuse Wolf-Moffett of recklessly causing serious physical injury to Garit Leeper by discharging a revolver pistol and striking Leeper in the upper left leg. He is also accused of acting in a manner that created a substantial risk to the life, body, and health of two children who were inside the residence.

Wolf-Moffett was previously convicted in Mercer County Circuit Court in February 2014 of felony distribution of a controlled substance.

The Grundy County Sheriff’s Office also reports the arrest of 28-year-old Brandon Dean Bibee Burkhardt on March 1st on felony charges of delivery of a controlled substance and unlawful possession of drug paraphernalia. His bond was set at $7,500 cash only, and he is to be supervised by the North Missouri Court Services. Burkhardt is also scheduled for the Associate Division of Grundy County Circuit Court on March 8th.

Court documents accuse him of possessing digital scales with a white crystal-like substance, which was methamphetamine drug paraphernalia, with intent to use it to ingest, inhale, or otherwise introduce methamphetamine or any of its analogs into the human body. Burkhardt is also accused of possessing more than 35 grams of marijuana.

Grundy County Prosecuting Attorney Kelly Puckett considers Burkhardt to be a persistent offender, and he is punishable by a sentence to an extended term of imprisonment, in that he has been convicted of two or more felonies committed at different times. Those convictions include in Jackson County Circuit Court in December 2013 of second-degree assault and theft of $500 or more but less than $25,000 and in Cass County Circuit Court in July 2021 of third-degree domestic assault.

(The article has been corrected to show the shooting incident took place in Brimson, not in Braymer)