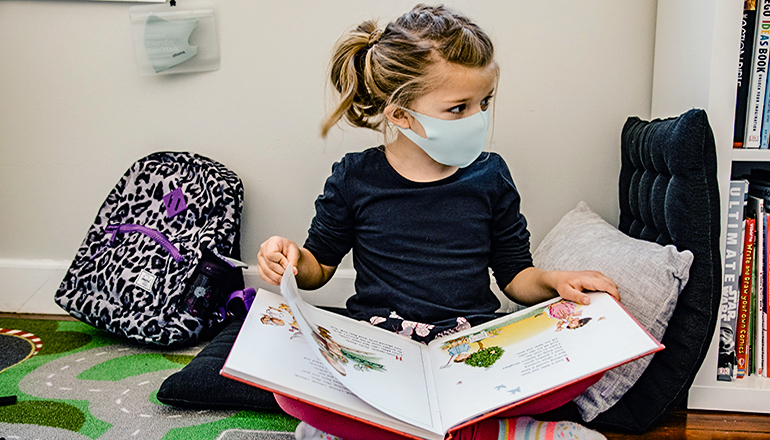 (Missouri Independent) – The schools in Gov. Mike Parson’s hometown will continue to require students, teachers, and staff to wear masks indoors despite a lawsuit filed by the Missouri attorney general challenging public school mask mandates across the state.

The Bolivar R-1 Board of Education in Polk County voted in a special meeting this month to require masks as a way to keep school doors open and students in class, Richard Asbill, the district’s superintendent, said Wednesday.

With only 28 substitute teachers to cover 250 to 265 certified staff and only one substitute on call in case a food-service worker is ill, Asbill said the margins are slim.

Attorney General Eric Schmitt on Tuesday filed a lawsuit against the Columbia Public Schools alleging that its mask mandate violates state law and constitutional rights. He wants to make the case a class-action lawsuit against all school districts requiring masks, estimated in the suit at about 50.

The attack on school mask rules comes as a larger share of COVID-19 cases are being reported among school-aged children and a handful of schools are being forced to cancel or postpone Friday night football games because of outbreaks.

Of 1,898 lab-confirmed COVID-19 infections reported statewide Wednesday by the Department of Health and Senior Services, 18 percent were among children under 18. In the spring, cases in that age group averaged about 10.5 percent of infections.

The department reported 2,716 total cases Wednesday, including 818 identified by antigen testing. The department does not provide age data on antigen-tested cases.

In a statement issued Wednesday through spokeswoman Michelle Baumstark, the Columbia district promised to defend its rule but would not say whether it will accept the role of representative of the entire class.

“We cannot comment on the Attorney General’s litigation strategy, but the Columbia Public Schools is prepared to aggressively defend our decision to prioritize the safety of our scholars and our staff as the global pandemic continues to move through our community,” the statement read.

Boone County has been averaging 60 to 70 new COVID-19 cases per day since mid-July, but it is not among the worst-hit counties during the Delta variant surge that began in mid-May.

Like the Bolivar school district, Columbia schools are relying on local health agencies for advice as well as guidance from the state Department of Elementary and Secondary Education and the Centers for Disease Control.

Polk County, in southwest Missouri, has been among the hardest hit by the Delta variant. It has the fifth-highest per capita infection rate in the state since May 1 and was the 16th highest out of 117 local health jurisdictions during July.

The Polk County infection rate has declined in August, Asbill said, and a decision to continue the mask rule will be made at the next board meeting.

The district views its mask policy as consistent with the “modified quarantine” guidance issued by the state in November, Asbill said. Instead of remaining at home for 14 days after close contact with a positive COVID-19 case, if both the close contact and individual who tested positive were wearing masks, the person in close contact does not need to be quarantined.

On Wednesday, he said, eight students and a teacher were in class after a close contact because they were wearing masks.

“It is difficult right now to be punished for following a rule and a standard the state provided us,” he said.

The declarations in the lawsuit, that the decision to require masks in schools is “unlawful, unconstitutional, arbitrary, capricious, and unreasonable,” are a slap in the face, Asbill said.

“When the Attorney General said local boards of education are being capricious, that really is very insulting to people who are elected locally to represent a community,” he said.

On the issue of masks, the state education department points to CDC guidance that masks should be worn indoors regardless of vaccination status.

“DESE was not aware of the Attorney General’s plans to file this lawsuit, so we are reviewing the case now and cannot comment further at this time,” the department said in a statement issued through spokeswoman Mallory McGowin.

The department wants a safe and successful start to the year, the statement read.

“DESE supports local school leaders in their ongoing efforts to keep their doors open for in-person learning and provide a safe educational environment for students and staff,” the statement read.

Schmitt wants the courts to recognize that a new law limiting the duration of local health orders applies to school districts because they are political subdivisions.

The law is the basis of similar lawsuits Schmitt has filed against mask mandates in St. Louis, St. Louis County, Jackson County, and Kansas City.

Because a political subdivision is defined in state law as “any agency or unit of this state which now is, or hereafter shall be, authorized to levy taxes or empowered to cause taxes to be levied,” the law could also be used to challenge mask mandates on the nine public community colleges that are requiring face coverings.

The state’s 13 four-year university campuses are not covered by the law because they do not have taxing authority.

Developments in other cases, however, could block enforcement of the new law before the Columbia case can get a hearing.

On Wednesday, the city of Overland in St. Louis County filed a lawsuit in Cole County asking the courts to block enforcement of all provisions of the bill because it violates the state constitution’s provision that bills must have a single subject.

The bill, sponsored by House Speaker Pro Tem John Wiemann, R-O’Fallon, began its legislative life as a three-page measure to increase financial reporting by local public agencies. By the time it was approved and sent to the governor’s desk, it grew to 49 pages and included changes to 25 chapters of state law, in 51 different provisions, from the public health restrictions to rural electric cooperatives to making it a felony to steal a catalytic converter.

Overland objects to a provision that limits its ability to charge fees for access to public rights-of-way.

“The Missouri Supreme Court has provided repeated and increasingly frequent warnings to the General Assembly and the Governor of the impropriety of enacting similarly flawed laws,” Overland’s lawsuit states. “This bill reflects that these admonishments continue to go largely unheeded, and it once again falls to the courts to ensure the integrity of the legislative process established by the people in the Missouri Constitution.”

A hearing on Overland’s request for a temporary restraining order is set for Thursday before Judge Cotton Walker.

If the bill survives those challenges, Schmitt may find it difficult to obtain certification of all school districts with mask requirements as a class of defendants, said longtime Jefferson City attorney Chuck Hatfield.

“Usually a class action is for a whole bunch of people you are going to have trouble finding,” said Hatfield, who previously served in the attorney general’s office under Democrat Jay Nixon.

The state education department does not track which districts have mask rules and which do not. But with only about 50 districts requiring masks, it shouldn’t be difficult to identify them, Hatfield said.  “It would be hard but not that hard to file against 50 districts,” Hatfield said.

Class-action lawsuits on behalf of a class of plaintiffs are common.

“Defendant class actions are so rare they have been compared to ‘unicorns,’” federal appeals court Judge A. Marvin Quattlebaum Jr., wrote in a 2007 opinion.

Photo by Kelly Sikkema on Unsplash