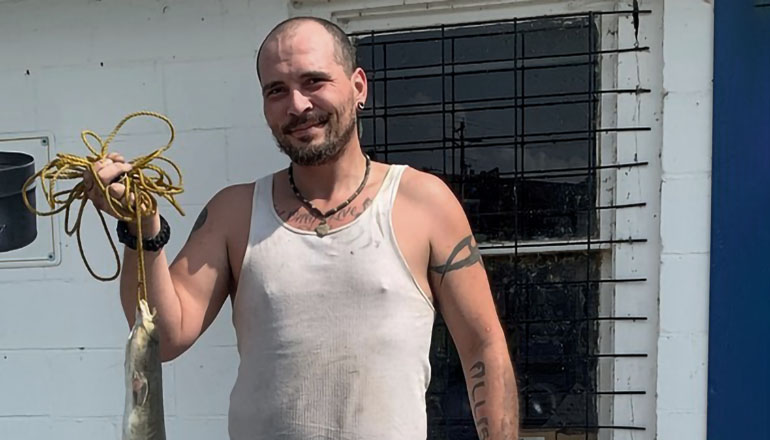 The Missouri Department of Conservation congratulates Carlin Allison of Doniphan on a rare feat, catching a state record American eel. Allison was catfishing on the Current River July 26 when he reeled in the 6-pound, 15-ounce eel on his pole-and-line. This makes the ninth state record fish recorded in 2021.

“I was using skipjack bait and originally thought I was pulling in a catfish,” recalled Allison. “My buddy and I were out at about 3 that morning, so it was dark outside, and I couldn’t see that well, but it put up one heck of a fight!”

Allison said he was about to cut the line after finding the eel at the end, but his friend immediately stopped him.

“I didn’t know what to do with it, but my buddy stopped me and said, “Hey, that’s a big eel, hold on!” he said. “Sure enough, we looked it up online and, it was obvious it was bigger than what was listed.”

The eel was weighed on a certified scale in Doniphan. The previous record was a 4-pound, 8-ounce eel caught on the Meramec River in 1993.

The American eel is listed as a Species of Conservation Concern in Missouri and is an uncommon catch but probably occurs occasionally in every large stream in the state. American eels control aquatic insects, crayfish, and other fish, and they serve as prey to other predators. The American eel is defined as “Other fish,” and harvest is regulated under the “Wildlife Code of Missouri.”

All eels in Missouri are female. Male eels spend their entire adult lives in estuaries along the coast; only females migrate to inland waters. Most of the female’s adult life occurs in freshwater. Eels then migrate to breed in the Atlantic Ocean south of Bermuda. It is assumed adult eels breed once, then die. Missouri’s eel population lives mainly in deep pools around cover, such as logs and boulders, in moderate-to-large Missouri streams and rivers. The state’s eel population has been reduced by large dams, which restrict its ability to migrate.

“I knew we had eel in Missouri, but never that big,” Allison said. “I really don’t know how to feel about holding this state record. I guess I’ve got bragging rights!”

To learn more about the American eel in Missouri, visit the American Eel section of the Missouri Department of Conservation website. For more information on state-record fish, visit this link.