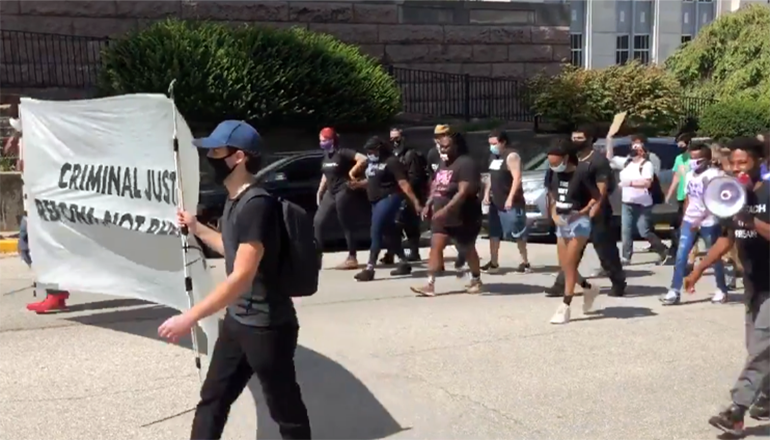 Protesters marched the streets in the heart of Jefferson City today to voice their opposition to the governor’s crime package. They walked down High Street in front of the Missouri Capitol and made a pitstop at the Governor’s Mansion. Police were on the scene to try and keep protesters from blocking the streets.

Gov. Mike Parson’s special session crime plan would let judges choose whether children 14 to 18 years old should be tried as adults for certain weapons crimes. It would also allow the Missouri attorney general to prosecute some St. Louis murder cases. Parson says out of at least 161 St. Louis murders so far this year, 33 suspects have been charged.

“Charge them as an adult because that is how we are going to fix violence – by being tough on crime to individuals that have made a mistake and should be held accountable but you are charging our youngest babies,” says Aldridge. “When does we go to ten? When do we go to nine? What’s going to be next? Eight? Seven? Are we locking up literally babies and putting them in jail with serial killers?”

Cori Bush of North St. Louis County, who defeated longtime St. Louis Democratic Congressman Lacy Clay in this month’s primary election, was among the crowd of protesters. They marched to the Cole County Jail and Bush had a message for law enforcement.

“We are about saving lives,” she says. “And so if you think we want to destroy your property – we don’t. If you think that we want to just disrupt just to disrupt – we don’t. We’re disrupting because you won’t stand up and do the right thing and make sure your work is to save lives.”

The legislation would also scrap a requirement for St. Louis police officers to live within the city and would create a witness protection fund to compel more witnesses to come forward in crime cases.

The Missouri House of Representatives gets back to work next week on the legislation. Three committees have scheduled hearings for Monday afternoon.