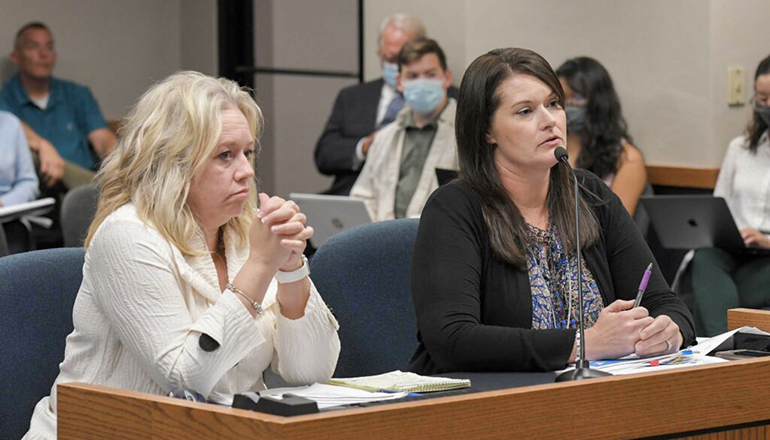 (Missouri Independent) – Exasperated lawmakers slammed leaders of the Missouri Department of Social Services on Tuesday, accusing them of passing off blame for a federal review that found the state fails to adequately report missing foster children.

Tuesday’s hearing of the House Children and Families Committee was spurred by a report issued last week by the U.S Department of Health Human Services Office of Inspector General that lawmakers described as “disturbing.”

The report, and the resulting House hearing, is only the latest example of legislative criticism of the department. Lawmakers have held a series of hearings over the last year on the department’s lack of oversight of unlicensed youth residential facilities accused of abuse that has expanded into the department’s handling of a variety of issues, like layoffs of Children’s Division employees.

The frustration among members of the committee was palpable Tuesday.

“What I heard was a department that has left the hearing early, who didn’t have answers to the questions that we were asking, and I’m really disappointed…” Rep. Mary Elizabeth Coleman, an Arnold Republican, and chair of the committee said in reference to DSS officials leaving before the hearing had finished. “There are people who are sitting on this dais who are furious.”

One of a bevy of issues the report on foster care found was a lack of adequate documentation by caseworkers — making it impossible to know if services were being provided and requirements met.

The federal watchdog’s review of 59 cases in 2019 found that nearly half of the case files contained no evidence children were reported as missing to local law enforcement or the National Center for Missing and Exploited Children, as required by federal law and state policy.

In one instance, a child had been sex-trafficked in as many as four states while missing, the report read.

“Kids are getting made prostitutes. And I don’t like it,” Rep. Dottie Bailey, R-Eureka said. “I don’t know where we go from here.”

Acting DSS Director Jennifer Tidball said the department takes responsibility for the report’s findings. In a Tuesday letter to Coleman, Tidball said the numbers in the federal report “speak for themselves.”

However, department officials went on to dispute figures cited in the report and pointed to policies put in place in prior administrations as contributing to challenges department leadership was up against.

The department referred to an Oct. 31, 2016, memo issued by then-Children’s Division Director Tim Decker that outlined administrative steps caseworkers could “stop doing” in order to focus on engaging children and families. That included no longer filling out a form documenting that the strengths and needs of a family were assessed.

While department officials said steps have been taken since then to reverse those policies — like instituting a checklist for reporting and working with the Missouri State Highway Patrol to ensure cases are reported to authorities if pushback is faced from local law enforcement — they stressed memos like the one issued in 2016 were examples of the “extremely difficult” cultural shift and “pervasive” practices they were attempting to change.

Bailey said raising the 2016 policy was “ridiculous” and accused DSS officials of passing the buck.

Rep. Keri Ingle, a Lee’s Summit Democrat and former children’s division investigator at the time the memo was issued, questioned if officials were saying department directors have the ability to change policies in conflict with state and federal law.

“Of course not,” said Joanie Rogers, the interim director of the Children’s Division within DSS.

Rep. Hannah Kelly, R-Mountain Grove, said she had yet to hear the department make an effort to sit down and listen to the caseworkers “who walk with these children during what is a very grievous, grievous chapter in any child’s life to ever have to be in this system in the first place.”

The federal review found that 978 children went missing at some point in 2019 from Missouri foster care.

Coleman said that translates to roughly 1 in 20 of the children who were in foster care that year.

Both Tidball and Rogers told lawmakers Tuesday they had not seen the 978 figure before the report and did not know its source.

When asked if that figure would be consistent with how many children were missing at some point in 2020, Tidball said she did not have that overall number. Currently, there were 95 kids listed as missing in the state’s case management system, Tidball said.

The state’s case management system was another area that the federal report noted needed improvement. It doesn’t have the ability to distinguish between children who are missing and whose whereabouts are unknown versus children in an unauthorized placement that officials are aware of.

The report noted that the state had requested adding additional status labels to its case management system to better distinguish between the scenarios, but that as of August 2021, “this change had yet to be implemented because of budget constraints.”

Rogers said that change would cost about $90,000. Tidball said the department was assessing how to do a more comprehensive system upgrade, but that it would cost upwards of $40 million.

Meanwhile, the department has paid the consulting firm Accenture to do a “top to bottom” review on case ratios, staffing challenges, and shortages within the department that has faced high turnover rates.

Kelly Schultz, the director of the Office of Child Advocate, which investigates complaints against the Children’s Division, said she wasn’t surprised by the issues highlighted in the report. But what it did shed light on was the scope of the issue.

Since 2019, improvements have been made, Schultz said but noted she still sees concerns regarding timely reports and follow-up services.

In an effort to address high turnover, lawmakers included language in the department’s budget to boost the salaries of Children’s Division caseworkers. But in July Gov. Mike Parson vetoed $2.1 million budgeted for three percent raises.

He also vetoed language that would have required the DSS director be “confirmed by the Senate to hold the office” in order to be paid their salary. Tidball has yet to be confirmed by state lawmakers’ despite serving her second stint as a director since 2019.

In his veto letter, Parson wrote the change was not part of his budget recommendations and “undermines the Executive’s constitutional authority to appoint and compensate department directors.”

Schultz said, “a perfect storm” of factors have contributed to where the department is today, including a high turnover rate of department directors, changes in the department’s models, the pandemic, budget cuts, and lawmakers’ own hearings raising concerns.

“Candidly speaking,” Schultz said, “I think we have an agency in duress.”

Coleman said lawmakers plan to hold an additional hearing and ultimately issue a report with legislative and budgetary recommendations.