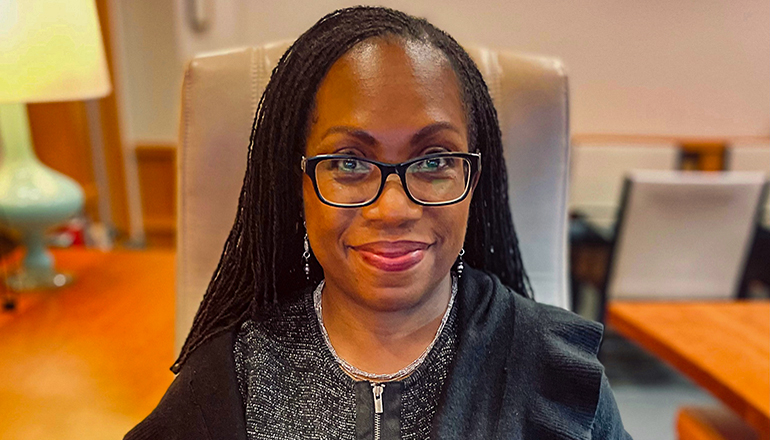 In her first public remarks since President Joe Biden nominated her last month, Jackson, who grew up in Miami, told the senators about her upbringing and career, including her time clerking for retiring Justice Stephen Breyer. Her daughters, husband, and parents looked on from the audience.

“It is extremely humbling to be considered for Justice Breyer’s seat. And I know that I could never fill his shoes, but if confirmed I would hope to carry on his spirit,” Jackson said.

The first day included four hours of statements from U.S. senators, with members of both political parties congratulating her on her nomination and impressive career.

Republicans, however, previewed the questions they will ask Jackson during the next two days, including bringing up their concerns with her openness to sharing her judicial philosophy and how she handled sentencing for some cases while a U.S. District Court judge. Most if not all Republicans are expected to oppose her nomination on the floor, but there would be enough votes for confirmation if all Democrats in the evenly divided Senate vote for Jackson and Vice President Kamala Harris casts a tie-breaking vote.

Jackson, 51, told the senators that she takes her responsibility and duty to be an independent judge very seriously, deciding her cases from a “neutral posture.”

“I know that my role as a judge is a limited one, that the Constitution empowers me only to decide cases and controversies that are properly presented,” Jackson testified. “And I know that my judicial role is further constrained by careful adherence to precedent.”

Jackson wrapped up her opening statement saying that she has dedicated her “career to ensuring that the words engraved on the front of the Supreme Court building ‘equal justice under law’ are a reality and not just an ideal.”

Judiciary Committee Chairman Dick Durbin, an Illinois Democrat, and ranking member Chuck Grassley, an Iowa Republican, used their opening statements to outline their political parties’ views on the judge’s qualifications and pitfalls while attempting to set a collegial tone.

“The reality is that the court’s members in one respect have never really reflected the nation they served,” Durbin said. “When the Supreme Court met for the very first time in February of 1790 in the Exchange Building in New York, there were nearly 700,000 slaves without the right of citizenship in this new nation of nearly 4 million people.”

“Neither African Americans nor women had the right to vote. There was no equal justice under the law for a majority of people living in America,” Durbin continued.

Durbin attempted to rebuff several GOP criticisms of Jackson, including that she is “a product of a campaign of dark money” judicial groups that want to overhaul the nation’s courts, that she has been soft on crime, and that she would be a “rubber stamp” for the Biden administration.

“There may be some who claim, without a shred of evidence, that you’ll be a rubber stamp for this president. For these would-be critics, I have four words — look at the record,” Durbin said.

Jackson has been before the U.S. Senate Judiciary Committee three times, he said, noting that her confirmation process for the United States Court of Appeals for the District of Columbia took place just last year.

Grassley said Republicans would “conduct a thorough, exhaustive examination of Judge Jackson’s record and views” and ask “tough questions” about her judicial philosophy.

“In any Supreme Court nomination, the most important thing that I look for is the nominee’s view of the law, judicial philosophy, and view on the role of a judge in our constitutional system,” Grassley said. “I’ll be looking to see whether Judge Jackson is committed to the Constitution as originally understood.”

What the GOP will ask

Republicans are likely to ask Jackson numerous questions during the next two days about her education, previous court cases, writings, and outlook on the role of associate justice on the Supreme Court.

Texas Republican Sen. John Cornyn said during his opening statement it would be “imperative” that the senators gain an understanding of her judicial philosophy.

“I have to say I was a bit troubled that you have not so far provided us with much clarity on that matter,” Cornyn said. “Someone as accomplished as you are — who has spent years engaging and thinking about our Constitution and laws –— has surely formed a judicial philosophy.”

“This is not your first rodeo,” Cornyn added.

Grassley, and numerous GOP senators on the panel, said they were also concerned about so-called “dark money groups,” including Demand Justice, advocating for judges who believe the U.S. Constitution is a “living” document.

The group has cheered Jackson’s nomination to associate justice, a stance that has raised several Republicans’ suspicions about Jackson.

“I want to be candid with you today, so you know exactly what it is I want to talk about,” Hawley said before listing off cases in which he felt Jackson was too lenient in sentencing.

“In each of these seven, Judge Jackson handed down a lenient sentence that was below what the federal guidelines recommended and below what prosecutors requested. And so I think there’s a lot to talk about there, and I look forward to talking about it.”

The White House has dismissed Hawley’s claims. Press secretary Jen Psaki said last week that some of Hawley’s research was taken out of context and that, as a trial judge, Jackson had largely stayed within sentencing guidelines or issued stronger sentences.

“Attempts to smear or discredit her history and her work are not borne out in facts,” she said.

Jackson’s own opening statement took place mid-afternoon after she was introduced by Thomas B. Griffith, a retired judge for the U.S. Court of Appeals for the District of Columbia Circuit, and Lisa M. Fairfax, Jackson’s former college roommate and a presidential professor at the University of Pennsylvania Carey Law School.

Jackson will return to the hearing room Tuesday to begin the first day of questioning from members, with each senator getting 30 minutes. That portion of the hearing process will continue Wednesday, with senators each getting a second, 20-minute round.

The hearing will wrap up Thursday when the Judiciary Committee hears from the American Bar Association and other witnesses.

The ABA Standing Committee on the Federal Judiciary –— which evaluates judges based on integrity, professional competence, and judicial temperament —  has rated Jackson as “well qualified,” its highest rating.

The earliest the Judiciary Committee would vote to send Jackson’s nomination for associate justice to the Senate floor is next week. Senate Majority Leader Chuck Schumer hopes to hold a final floor vote before Easter, which is April 17.

Jackson, if confirmed, would join the Supreme Court later this summer following the retirement of Justice Breyer.