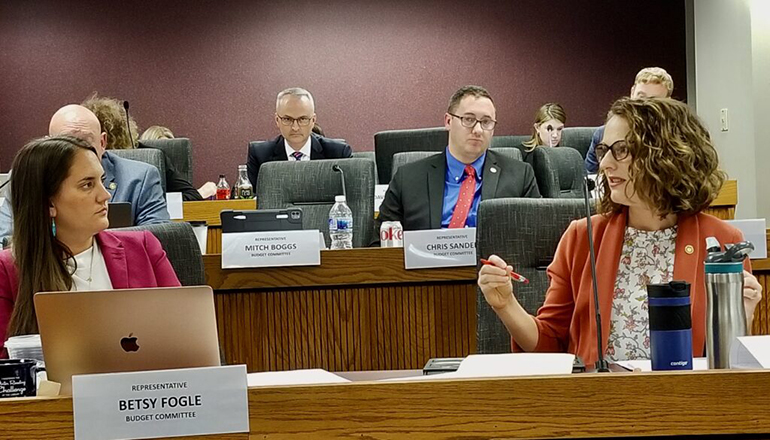 The only significant addition to education budgets approved by the committee was to restart the teacher Career Ladder program, providing $21 million to give experienced teachers $1,500 to $5,000 a year in extra pay. The program has not been funded since 2010.

The ruling prevented Rep. LaKeysha Bosley, D-St. Louis, from pushing an amendment giving $104 million to Lincoln University to cover funds it has taken from its general budget to match federal land grant appropriations.

In an interview with The Independent, Bosley said she will try again when the budget is debated on the House floor and may try to use federal stimulus funds, which are not restricted by the rule requiring a corresponding cut.

“It is disheartening, to say the least,” Bosley said. “This is what they deserve.”

Refusing to use some of the $1.8 billion of general revenue surplus to fund school transportation means districts will pay the costs from funds that could be used for after-school or other enhancement programs, state Rep. Maggie Nurrenbern, D-Kansas City.

“We have continued to have a tremendous underinvestment of state resources into our schools,” she said.

In his budget proposal for the coming fiscal year, Gov. Mike Parson did not recommend any increase in funding through the $3.56 billion foundation formula or for school transportation. The $214 million sought by Nurrenbern is the difference between the $114 million proposed for transportation costs and the 75% share state law indicates is a state responsibility.

Smith told the committee he was adhering to what is known as the balancing rule even as he recognized his budget plan leaves a record amount of revenue unspent.

“That money sitting in the state treasury doesn’t do anybody any good,” Smith said.

The only significant increase in general funding for public schools in the coming year’s budget will be through a dedicated sales tax. The tax, which is distributed on a simple per-pupil basis, will provide $1.15 billion in the coming fiscal year, about $40 million more than this year.

“We are a rare state that has dramatically decreased our funding of higher education over the last decade,” Merideth said.

Parson’s budget recommended a 5.3% increase in higher education funding for the coming year, dedicating $838 million to four-year universities, $161.7 million to community colleges, and $8.4 million to the State Technical College in Linn.

Merideth wanted to bump it to 10%.

Smith, however, said the biggest chore facing budget writers is using the many billions of federal funds flowing into the state that have a deadline for use. Evaluating Parson’s proposals for federal stimulus spending and deciding the best way to use the state tax surplus is time-consuming, Smith said.

“It is a difficult thing to jam all that in a four-month legislative session,” he said.

The difficulty of getting big-dollar items past Smith also deterred some smaller proposals. After Bosley withdrew her proposal for restoring Lincoln University’s past spending to match federal land-grant funding, an amendment prepared to provide 100% of the needed match in the coming year was not offered.

Parson proposed $5.3 million for Lincoln’s budget for land grant match. Another $4.4 million is needed to provide a full match.

The politics of COVID-19 reached into the budget deliberations Thursday when Rep. Chris Sander, R-Lone Jack, offered an amendment to put limits on mitigation measures at school-sponsored events. Under his proposal, which will be part of the budget, no state tax money can be spent on any event open to the public if people who are not vaccinated or not had recent negative tests are not allowed to attend.

The amendment, which Sander succeeded in attaching to all the budget bills, stems from being turned away from an event, he said.

“I suffered quite an embarrassment after buying a ticket and then being told I couldn’t enter,” he said. “We have gone two years without a vaccine mandate, and this is just ensuring that whatever happens with the pandemic going away that doesn’t happen.”