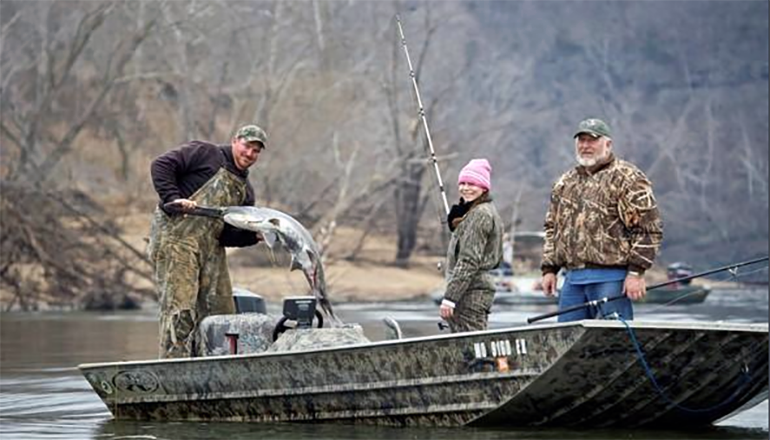 Imagine catching a giant, prehistoric fish whose ancestors swam during the time of dinosaurs. That is a reality for thousands of paddlefish snaggers during Missouri’s annual spring paddlefish snagging season. Paddlefish — named for their large, paddle-shaped snouts — are an ancient species that can grow to seven feet and weigh more than 100 pounds.

According to MDC, the state’s major paddlefish snagging waters include Lake of the Ozarks, Harry S. Truman Reservoir, and Table Rock Lake. A fishing permit is required, unless exempt. The daily limit is two paddlefish, and the possession limit is four. No person shall continue to snag after taking a daily limit of two paddlefish on these waters. This regulation is new for Table Rock Lake.

A new regulation change established a statewide minimum length limit of 32 inches — measured from eye to fork of the tail — for sport/recreational taking of paddlefish, up from the previous minimum length of 24 inches for most areas of the state.

The existing minimum length limit of 34 inches — measured from eye to fork of the tail — will remain in effect for Lake of the Ozarks, Table Rock Lake, Harry S. Truman Reservoir, and their tributaries.

All paddlefish under the legal minimum length must be returned to the water unharmed immediately after being caught. MDC offers these tips: