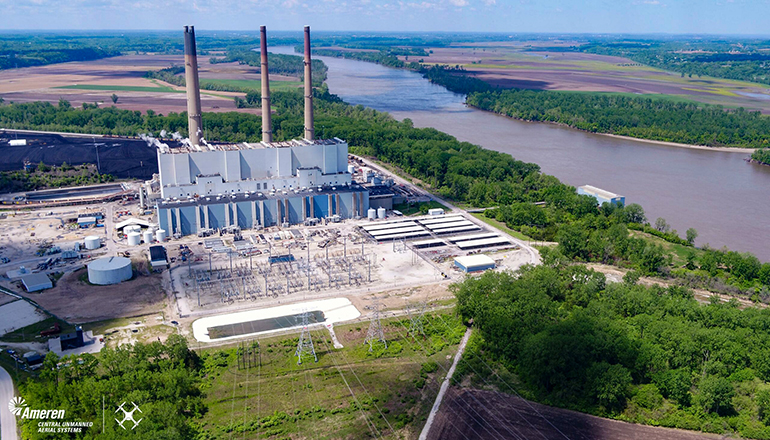 “It is truly a disheartening feeling of betrayal from an agency in my younger years I would have imagined would have had the environment’s best interest in the fore,” Zerbe said Thursday evening.

Zerbe, along with a dozen other residents and an environmental clinic at the Washington University in St. Louis, during a virtual public hearing asked the Missouri Department of Natural Resources to withdraw a proposed permit for the Labadie Energy Center and require Ameren to invest in technology to better protect the Missouri River and groundwater in the floodplain.

“Our health should be more important than a big company and their bottom line,” said Jane von Kaenel, a St. Louis County resident who attended the meeting. “We need a department that stands up for us, that protects the environment and serves all Missourians.”

The Labadie plant, a four-unit coal plant adjacent to the river, is the state’s largest. It’s been operational since the 1970s, and an environmental attorney who spoke at the meeting said its permit has been “poorly mismanaged for decades.”

For 16 years, from the late 1990s until 2015, it was allowed to operate under an expired permit and a variance from the 1970s that allows it to periodically breakwater quality standards for hot water it discharges into the Missouri River.

When DNR reissued the permit in 2015, the Sierra Club appealed the variance component. That appeal was heard by the state’s Administrative Hearing Commission two years ago, but it has yet to rule.

Now, DNR is on the verge of issuing Ameren another permit that environmental groups claim would violate federal clean water rules. Because of the interest in the permit, DNR extended the public comment period until 5 p.m. on July 14.

For its part, Ameren defends the permit provisions, saying it is using the best technology and monitoring to protect the environment.

“We hunt, fish, and recreate in the Missouri River just like everybody else does, so in the end, environmental stewardship is a big pillar of our company and something that we take very, very seriously,” said Craig Giesmann, senior manager for environmental services at Ameren.

Coal plants like Labadie are required to have permits limiting the substances they can release into the air and water. Up for renewal now is Labadie’s water permit.

A main point of contention is Labadie’s use of water from the Missouri River to cool the plant. The water, often well over 100 degrees, is discharged back into the river.

Environmental groups say the hot water plume jeopardizes the endangered pallid sturgeon. The U.S. Fish and Wildlife Service wrote to DNR last year expressing its concern and recommending enhanced monitoring for the fish, which can be difficult to identify.

Neighbors and environmentalists want Ameren to invest in a system that would recycle the cooling water, which would cut down drastically on the amount of hot water a power plant discharges into the river.

Tara Rocque, assistant director of the Interdisciplinary Environmental Clinic at Washington University in St. Louis, pointed to Ameren’s profits, saying the utility is harming the environment rather than making upgrades.

“They should be investing that money into improving the facility as opposed to just pocketing those profits and destroying our river,” she said.

DNR says Ameren is not required to make changes because the hot water from Labadie isn’t harming the river or wildlife. Ameren agrees.

“The bottom line is that the once-through cooling has no adverse impact on wildlife due to the operations at Labadie,” Geismann said, adding that the company had studied the fish both upstream and downstream of the plant.

But Peter Goode, an environmental engineer at the Washington University clinic, says DNR is ignoring USFWS’s concerns about the type of study being done to find the fish and instead speculating in favor of Ameren about how prevalent sturgeons are in the stretch of the river near Labadie.

The Washington University clinic has been handling the Sierra Club’s appeal of the 2015 permit and variance. The appeal has been in the final stage — simply waiting for a ruling from the Administrative Hearing Commission — for two years.

Now that Ameren is on the verge of getting a new permit, it has filed to dismiss the appeal as moot, saying the Sierra Club failed to appeal the variance approved by the Clean Water Commission in 2020 and missed its opportunity to object.

“It would be an incredible abuse of discretion for the Administrative Hearing Commission … to dismiss a case as moot based on their own administrative delay,” Rocque said.

That ruling, which came from a dispute in Hawaii, decided that entities discharging potential pollutants into groundwater must get a permit if the discharge is the “functional equivalent of a direct discharge from the point source into navigable waters.”

In Ameren’s case, environmentalists argue, that means it needs permits to govern its coal ash ponds because the groundwater near the plant flows toward the Missouri River and could carry toxins like arsenic and boron from the coal waste to the water. The ash ponds have been leaching for decades.

Instead, DNR is requiring Ameren to test for chemicals and study the groundwater flows near the plant.

“Frankly, it allows Ameren to delay compliance with the Clean Water Act and serves no other purpose,” Rocque said.

Geismann said the Supreme Court case is contemplated in conditions of the permit requiring Ameren to do more study.

“Those are specific actions that Ameren has to take in response to groundwater,” Geismann said, adding that Ameren is doing “exactly what’s required.”

At another plant, Geismann said the company is pumping out groundwater from ash ponds and treating it. Ameren plans to expand that effort to Labadie, he said.

For residents near Labadie, this permit is the latest in their fights to clean up Labadie. Patricia Schuba has volunteered with the Labadie Environmental Organization since neighbors organized a decade ago to fight a proposed coal ash landfill.

She said she didn’t realize the impact of the plant until she started digging in.

“I would look at the stacks down there,” Schuba said, “and I would just assume somebody was monitoring.”