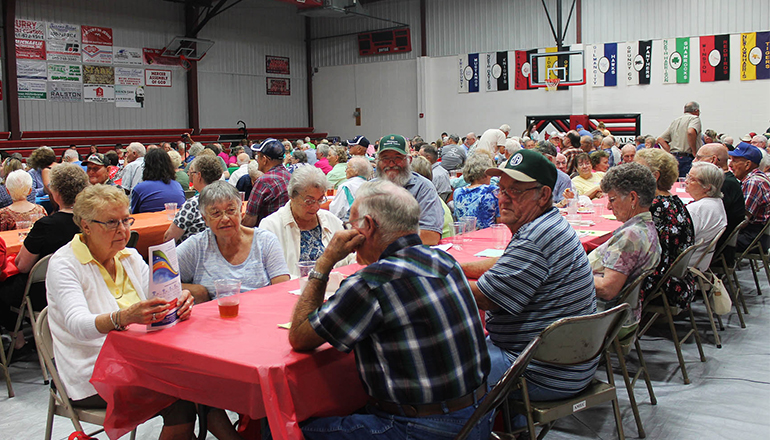 Prior to the business meeting, over 380 members and guests enjoyed the evening meal served by the Mercer County 4-H members. Entertainment was provided by The Marks Family from Jefferson City.  Members browsed the information booths and visited with employees of Grundy Electric Cooperative and Mid-States Services, LLC. Various booths exhibited products and services available to GEC members.

Grundy Electric Cooperative Board President Dan Lentz presided over the business meeting. Lentz welcomed and thanked members for their attendance and participation in the Cooperative’s annual business meeting. President Lentz announced that the board of directors approved a capital credit refund for the remaining allocation of 1984 and 25% of 2017 totaling $189,145.23. Capital credit checks will be given to members during Member Day events scheduled for October 23, 24 and 25.

General Manager Scott Wilson thanked members for their commitment to the Cooperative by attending their Annual Membership Meeting. Wilson introduced Grundy’s Board of Directors. Wilson advised members that the Cooperative adheres to the seven cooperative principals: voluntary and open membership, democratic member control, members’ economic participation, autonomy and independence, education and information, cooperation among cooperatives and the concern for community. He presented “Years of service” Awards to seven employees. Wilson also discussed the reliability of service, vegetation management, a cost of service study and the Coops commitment to “Zero Contacts”.

Guest speakers Kendra Betz of Trenton and Ethan Billups of Ridgeway spoke about their experiences at the Youth Tour Leadership Conference in Washington, D.C. and thanked Grundy Electric members for supporting the program.

Members elected three directors to each serve a 3-year term. Board incumbents Adrian Cox of rural Trenton, representing Area 1; Dan Lentz of rural Browning, representing Area 2; and Alan Guernsey of rural Bethany, representing Area 5 were re-elected. Members also approved a bylaw amendment which abolished the process of director nominations being made from the floor at the annual meeting.  The bylaws stipulate a member may still run for the board by contacting the nominating committee or by presenting a petition.