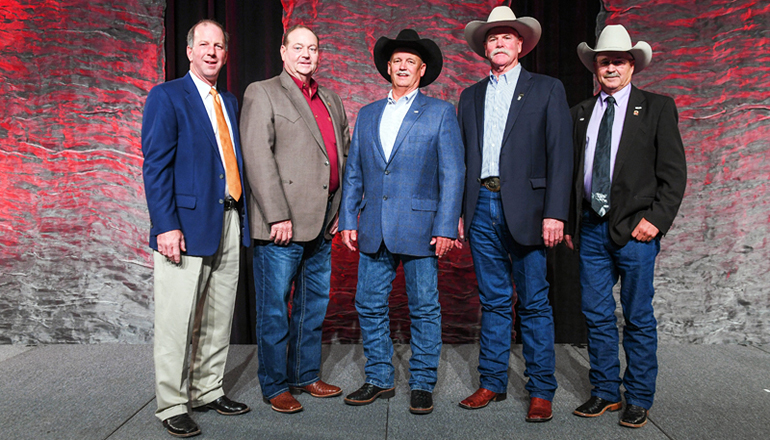 Five directors were elected to the 2018-2019 American Angus Association® board of directors, as well as a president and chairman and a vice president and vice chairman of the board, during the 135th Annual Convention of Delegates hosted at the 2018 Angus Convention in Columbus, Ohio.

A total of 298 delegates from 41 states and districts represented Association members at the Annual Convention of Delegates and elected the 2018-2019 officers and directors. Directors can serve up to two three-year terms on the board and, if elected, serve additional one-year terms in office as president and chairman and/or vice president and vice chairman.

Jim Brinkley and his family run a diversified farming operation near Milan, Missouri. Since purchasing their first farm in 1984 and 60 head of Angus cows in 1995, Brinkley and his wife, Sherry, have grown Brinkley Angus Ranch to 400 Angus cows. They also farm more than 1,000 acres of corn and soybeans. Brinkley attended Missouri Auction School and has a background in livestock marketing and commercial beef production. He currently serves as Missouri Angus Association president and on the University of Missouri Thompson Farms advisory board.

James Coffey is a fifth-generation Angus breeder who was raised on the family’s cattle and tobacco farm, Branch View Angus, near Hustonville, Kentucky. Coffey has spent his life working alongside his father and grandfather helping with the cattle operation and previously the tobacco operation. While serving on the American Angus Association board of directors, he has served as Angus Foundation chairman and on the Angus Productions Inc. board of directors. He also served as chair of the industry relations committee and on the finance and planning committee.

Chuck Grove grew up on his family’s registered Angus farm in Forest, Virginia. He was an American Angus Association regional manager serving Kentucky and Tennessee, and during his 39-year tenure, he also covered Virginia, Maryland, West Virginia, Delaware, and Ohio. Grove and his wife, Ruth, reside on the family farm and run a 100-head Angus herd. During his first term on the American Angus Association board of directors, Grove served on the finance and planning, breed improvement and industry relations committees. He served as chair of the events and education committee and vice chair of the member and affiliate services committee. He has also served on the Angus Productions Inc. board of directors.

Mike McCravy and his wife, Christy, established MM Cattle Co. with 40 cows and a dream in 1999. Today’s operation consists of 165 registered-Angus females along with a commercial cow herd situated in west-central Georgia. During his time on the American Angus Association board of directors, McCravy has been a member of the breed improvement, activities, and finance and planning committees, and chairs the member services committee. He serves on the Angus Productions Inc. board and represents the Association on the National Cattlemen’s Beef Association cattle health and well-being committee.

Mick Varilek is a lifelong Angus breeder and rancher from Geddes, South Dakota. Varilek Angus consists of 500 registered Angus females, 4,000 acres of native pasture and 1,000 acres of grass hay, irrigated alfalfa, and cropland. The ranch markets 175 registered Angus bulls and 30 registered females to commercial and seedstock producers each February. During his first term on the American Angus Association board of directors, Varilek served on the Certified Angus Beef LLC and Angus Genetics Inc. boards as well as breed improvement, activities and industry relations committees.

John Pfeiffer, Jr., Mulhall, Oklahoma, was elected as Association president and chairman of the board. Pfeiffer, who succeeds Kevin Yon, Ridge Spring, South Carolina, has previously served as vice president and vice chairman and treasurer, as well as six years on the board of directors. His family operates a diversified farming operation consisting of 2,200 acres of crops and pasture. Much of the wheat, alfalfa, and corn go directly toward the 140 registered- and 75 commercial-Angus cows. He also has been president of the Oklahoma Angus Association, a member of the first Oklahoma Ag Leadership Program, a director for the Oklahoma Cattlemen’s Association, and president of the Logan County Cattlemen’s Association.

Don Schiefelbein, Kimball, Minnesota, was elected by delegates to serve as Association vice president and vice chairman. He has served on the Association board of directors for six years and spent this last year as Association treasurer. Additionally, he serves as the 2018 National Cattlemen’s Beef Association (NCBA) policy division vice chairman. His family operation was started in 1955 by Frank Schiefelbein, and 62 years later with the addition of nine sons and numerous grandchildren and great-grandchildren, the operation continues to grow as fast as the family. Today, Schiefelbein Farms runs more than 1,000 registered females, farms 4,600 acres and feeds out 7,500 head of cattle.

David Dal Porto, Oakley, California, who is currently serving his second term on the board of directors, will serve as the 2018-2019 Association treasurer. Dal Porto and his wife, Jeanene, still manage their registered and commercial Angus operation in Oakley, Brentwood and northern California. They have three children—Lindsey, AJ, and Dawson. Dal Porto has firsthand experience at every level in the evolution of performance information and how to apply it. He complements that knowledge with a management background developed from his experiences. Dal Porto and his bull sale partner, David Medeiros, were awarded the 2011 Certified Angus Beef® (CAB) Seedstock Commitment to Excellence Award at the CAB Annual Conference.

For more information about the American Angus Association board of directors, visit angus.org.