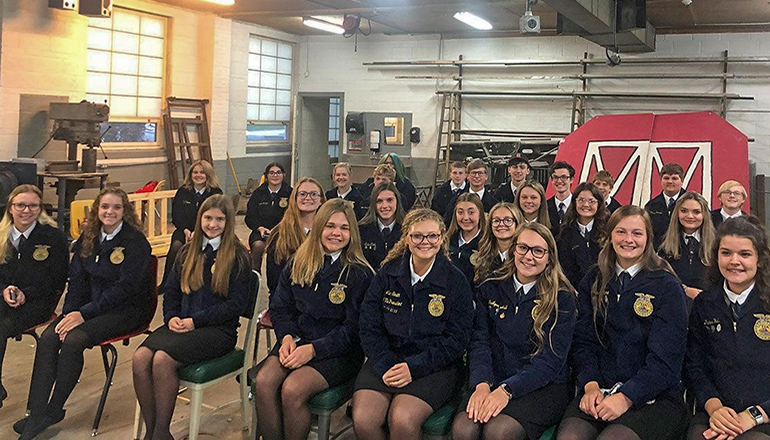 Last year, at the 2020 FFA National Convention (held virtually), the Braymer FFA chapter was named a top 10 chapter in the Model of Excellence division. Braymer was one of three Missouri chapters, along with Ashland and Troy, to earn the honor, which recognizes the top 10 chapters in the nation.

Paityn Hall, a senior and the chapter president, says for the small chapter of 56 members in this rural Caldwell County community, it was a big moment.  “It was a huge honor,” she says. “Coming from a small town like Braymer, population like 800, it’s not something I ever expected,”  Hall says the willingness of the students to get involved and put in time make the chapter successful. “We’re all here all the time,” she says. “We all put in the effort, and we all put our heart into it. We all show up, and we get the job done.”

Paige Brock, ag teacher at Braymer and FFA advisor for the chapter, says that is an early expectation and opportunity for chapter members — letting them know they can all participate, and the chapter needs them.  The Braymer FFA does a lot of planning to be successful, holding several events throughout the year, including popular professional development sessions that teach life skills to students, like changing oil, changing tires, tying a tie, or making breakfast.

For Brock, the recognition last fall was extra special. Her dad was an ag teacher, and her brother is as well, serving as one of the FFA advisors for the Troy FFA, one of the other Missouri chapters to earn the top 10 recognition.  “He had so much passion,” Brock says of her dad. “He just loved every ounce of it.”

It was a different year, without members of the chapter being able to take the traditional trip to National Convention, but Brock says it was nice in that the whole chapter got to celebrate together while watching the convention. As an advisor, she enjoys those moments working with the students and seeing their work pay off.  “I do really enjoy my kids and coming to work,” Brock says.

“Braymer is such a tight-knit community.” It helps to have the community backing the chapter. “Our community is very supportive,” Hall says. She says the community provided a celebratory dinner after the chapter earned top 10 status. It is one of many memories she’ll cherish from her FFA years. “FFA is going to be what I miss most about high school for sure,” Hall says. “Coming into my freshman year, I had no idea what it would become.” She grew up on a farm but was not initially interested in a career in agriculture, but her FFA experience changed that. “I never imagined wanting to be in the agricultural field of work, but this is what I want to do now,” she says.

Brock says that for smaller FFA chapters, it takes all students being active and involved to succeed, and that approach has led to success for her chapter. “We’re pretty small, but we’re pretty mighty,” she says.