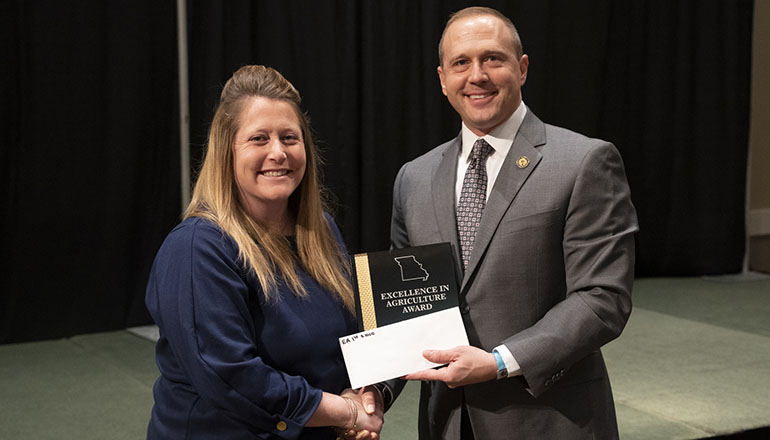 Brandi Ellis, of Weatherby, won the Missouri Farm Bureau Young Farmers and Ranchers Excellence in Agriculture Award during the organization’s 107th annual meeting on December 7 at the Lake of the Ozarks.

The Excellence in Agriculture Award is designed to recognize young farmers and ranchers who have not received a majority of their income from an owned production agriculture enterprise for the past three years.

Ellis was recognized for her involvement in Farm Bureau, agriculture, and community during the annual YF&R breakfast. She earned $500 checks from the MOFB Foundation for Agriculture and corporate sponsor Ford Motor Company.

The DeKalb County Farm Bureau member also won a trip to Atlanta, Georgia, to represent Missouri at the American Farm Bureau Federation (AFBF) YF&R Excellence in Agriculture Award Contest this January. The contest is part of the AFBF annual meeting where they will compete for the grand prize of a new Ford truck and paid registration to the AFBF YF&R Conference in Louisville, Kentucky in March. Runner-up wins a Case IH Farmall 50A tractor from Case IH. Third place earns a combination of prizes, such as 40” tool cabinets, a $500 Case IH parts card, cash from American Agricultural Insurance Company, and Stanley Black & Decker merchandise.

Ellis grew up on a forage and row crop farm and now lives on a diversified farm with her husband, Justin, and two young sons. Their 1,200 acres of row crops complement a commercial cow/calf operation. Her husband farms full time, while Ellis is a vocational agriculture instructor and FFA Advisor at Maysville RI High School. She has a degree in agriculture education and finished her masters in administration by taking night classes while she taught. She is also a licensed crop insurance agent.

In a five-year period, Ellis grew the school’s ag education program from 29 to 117 students. The growth enabled the program to add a part-time agriculture instructor. The FFA Chapter now ranks 11 out of 340 in the state. One of her goals is to be ranked among the top 5 chapters. Part of that effort will include building an FFA alumni chapter. When she is not teaching, Ellis is involved in the farm operation. She is responsible for management decisions in the row crop operation and works side-by-side with her husband in all fieldwork.

As a member of the DeKalb County Farm Bureau board and county Promotion & Education chair, Ellis has coordinated major promotion and education activities from Thank-A-Farmer promotions to an Ag Expo and Farm Day that works with community businesses to teach students s. about agriculture, conservation, and community service. Ellis plans to increase Farm Bureau involvement at the local and state levels. She remains active on the county extension council and fair board and is fair livestock superintendent. Ellis is involved in many more community efforts from her church to volunteering at the Second Harvest food pantry.

Second place in the contest went to Austin Yackley, of Taylor. He received $200 and an expense-paid trip to the AFBF Annual Meeting. Placing third to win $100 was Charlie Brooks, of Mountain Grove in Wright County.