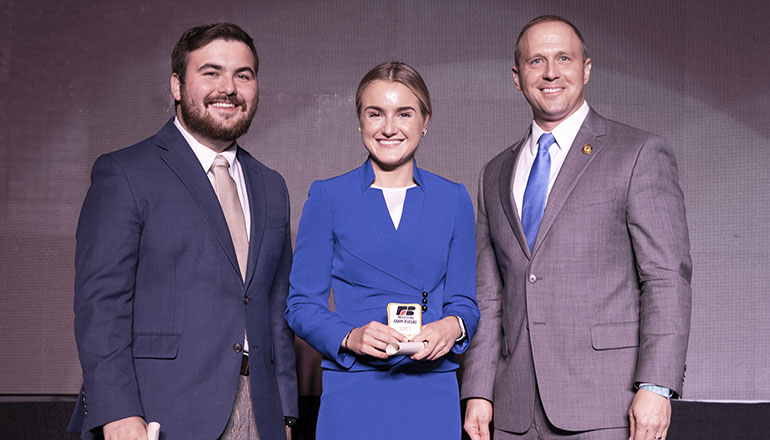 Four judges selected Jacob Hall, of Marshall, and Jessica Janorschke, of St. Joseph, as 2022 Missouri Farm Bureau Ambassadors during the organization’s 107th annual meeting on Dec. 5 at the Lake of the Ozarks.

The MOFB Ambassador Program selects a male and female student 17-to-22 years of age to represent agriculture and Farm Bureau for one year. Each Ambassador receives a $2,500 educational scholarship. Throughout 2022, the Ambassadors will make select appearances representing Farm Bureau during a legislative trip to Washington, D.C., in March, the Missouri State Fair in Sedalia, and other events promoting agriculture.

Hall represented Saline County Farm Bureau and is the son of John and Diane Hall of Marshall. Although his parents both work off the farm, the family still raises livestock. The University of Missouri-Columbia sophomore is majoring in Agriculture Education. He is a member of Alpha Gamma Rho fraternity and Collegiate Farm Bureau, and a 2020 Agricultural Education Ambassador. Hall interned this year with the Missouri Soybean Association. The Missouri 4-H and FFA alumni is also a Missouri Cattlemen’s Association member. As an FFA student, Hall was state FFA vice president and earned the American FFA Degree. His FFA Supervised Agricultural Experience (SAE) during high school involved raising llamas and rabbits.

Janorschke represented Buchanan County Farm Bureau and is the daughter of John and Michelle Janorschke of St. Joseph. The Janorschkes are long-time Farm Bureau members who also work off the farm. They do own some acreage managed for wildlife and pollinators, and also cash rent land for corn and soybeans. Janorschke is a junior at the University of Missouri-Columbia majoring in agribusiness management. On-campus she is involved in public relations efforts Rocking Against MS, the Missouri Alpha Chapter of Pi Beta Phi Fraternity for Women, and Mizzou’s Homecoming Steering Committee. She is also a Collegiate Farm Bureau member and has served hundreds of community service hours for many organizations. The honor student is a Jerry Litton and Borlaug scholar. As a student at DeKalb High School, Janorschke was involved in FFA and served as state FFA vice president and area FFA president. She raised Jack Russell terriers as her SAE project in high school.

After graduating, she plans to work as a marketing strategist to help overcome misperceptions about agriculture.

Twelve students competed in the contest, which began in the morning with judges interviewing the 12 students competing. That evening, six finalists presented five-minute speeches and extemporaneously responded to a question before judges selected the winners. The Ambassador program is sponsored by the Missouri Farm Bureau Promotion and Education Committee. Scholarship funds come from the Missouri Farm Bureau Foundation for Agriculture.