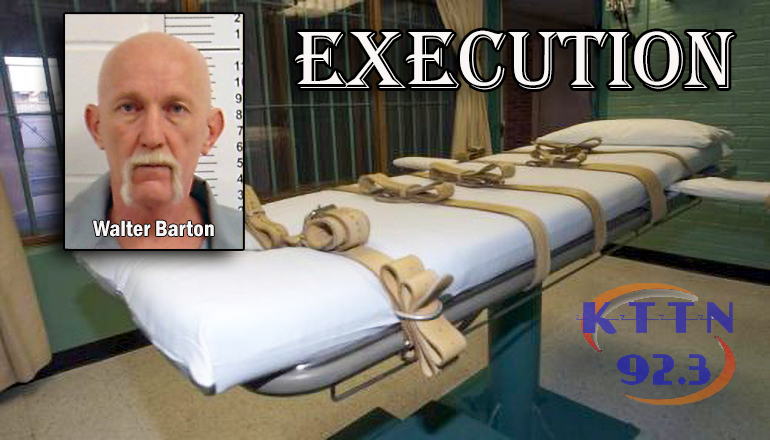 At 6:10 p.m. on Tuesday, May 19, 2020, convicted murderer Walter Barton, 64, was pronounced dead at the state prison in southeast Missouri’s Bonne Terre. Barton was convicted of first-degree murder for the 1991 brutal stabbing death of 81-year-old Gladys Kuehler of southwest Missouri’s Ozark.

His death makes Missouri the first state in the nation to follow through with an execution since the coronavirus began wreaking havoc on the U.S. According to CBS News, COVID-19 concerns have led to other states postponing executions among death row inmates. The Death Penalty Information Center lists Alabama as carrying out the last execution – on March 5.

Missouri Department of Corrections spokesperson Karen Pojmann tells Missourinet social distancing measures were taken to protect those involved in the execution. She says the nine witnesses were divided into three rooms big enough for them to stay 6 feet apart. According to Pojmann, everyone who entered the prison was screened, with a temperature check, before being allowed to enter, and everyone was given a face cover and hand sanitizer.

Pojmann says no staff or inmates at the maximum-security prison have tested positive for COVID-19.

For nearly 30 years, Barton’s case has been working its way through the court system by way of five different trials. His attorneys attempted to have their client’s execution overturned by claiming the man is innocent and is also incompetent to be put to death due to a brain injury. The 8th Circuit Court of Appeals and the U.S. Supreme Court denied Barton’s appeals and Gov. Mike Parson told reporters Monday that he did not foresee any reason to intervene.

Despite Parson’s comment, death penalty opponents went to Jefferson City today to urge the governor to grant clemency to Barton. A caravan of vehicles drove by the Governor’s Mansion honking and flashing their vehicle lights. A press release from the organizers says key testimony against Barton came from a jailhouse snitch with a long criminal history of crimes of dishonesty such as fraud, bad check writing, forgery, escape, and the use of aliases. The release says the state agreed to drop a pending charge against that witness in exchange for her testimony against Barton.