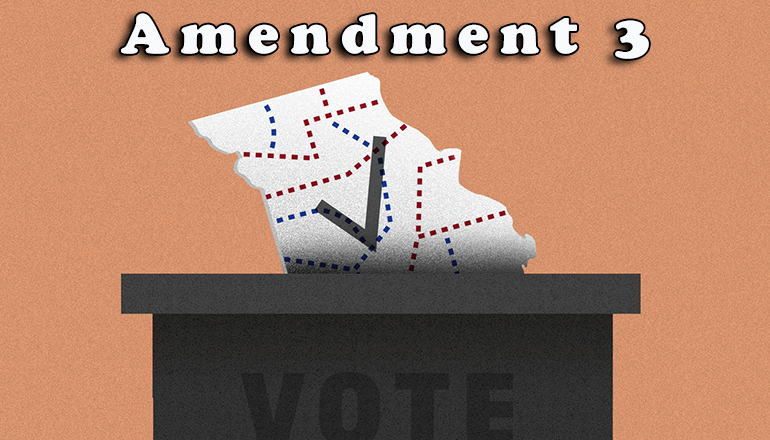 (Missouri Independent) – Missouri voters on Tuesday repealed a constitutional amendment they enacted in 2018 that would have required legislative districts be drawn to ensure partisan fairness.

They replaced it with one that critics contend could forgo the use of total population to draw districts and instead exclude all non-voters, specifically children and non-citizens — tilting the political scales toward older, rural areas of the state that tend to vote Republican.

Amendment 3, one of two statewide ballot measures submitted by state lawmakers, was carried to passage in part by the strong support from Republican statewide candidates, overcoming a $7.1 million opposition campaign.

With 98 percent of precincts reporting, Amendment 3 was winning 51 percent to 49 percent.

The other measure on Tuesday’s statewide ballot, Amendment 1, was defeated. It would have extended term limits to include various statewide officials.

At stake in the Amendment 3 vote was control of the process that draws 163 Missouri House and 34 state Senate districts that will be used in elections from 2022 to 2030. This year’s election was the last using the districts created in 2011.

Each election under the 2011 map, including Tuesday, produced a Republican supermajority in both legislative chambers, with more than two-thirds of the seats in GOP hands.

The vote Tuesday was a major goal of Gov. Mike Parson since 2018 when voters approved the redistricting plan under the banner of Clean Missouri.

The guiding policy of Clean Missouri was to make overall partisan fairness a priority, with a mathematical formula for testing it, followed by drawing compact districts that did not cross political subdivision lines or break up communities of interest.

Opponents accused backers of Clean Missouri of creating a gerrymandered legislature where every district was 50-50 between Democrats and Republicans.

Supporters countered that overall fairness, not absolute equality, was the goal.

An analysis in 2018 by the Princeton Election Consortium estimated it would produce 33 House districts that were truly competitive between the parties, with most other districts tilting toward one party or the other.

But that redistricting plan will never go into effect, now that voters have repealed it by approving Amendment 3.

Supporters of Amendment 3 relied on piggybacking it on the general Republican campaign, with the Missouri Republican State Committee providing all but $941.36 of the $200,000 in cash raised by the committee called Fair Missouri.

The only other receipt is $40,978 in in-kind support from the conservative Missouri Alliance for Freedom. Several groups have spent small amounts independently backing Amendment 3, including $22,000 by Don’t Tread on MO PAC.

The Missouri Farm Bureau was one of the conservative organizations pushing for passage of Amendment 3. The farm bureau noted accurately that only about 3 percent of the donations opposing Amendment 3 have come from donors giving small amounts, $5,000 or less.

“In 2018, out-of-state political activists came up with a deceitful plan to change our state constitution,” the Farm Bureau states on its web page dedicated to Amendment 3. “Since they kept losing elections at the ballot box, they decided to gerrymander districts to put their thumb on the scales.”

The Clean Missouri initiative passed in 2018 with 62 percent of the vote, winning in 80 of 114 counties, St. Louis and Kansas City. Along with changes to redistricting, the 2018 initiative also limited lobbyist gifts to lawmakers to a token $5 value and capped campaign contributions to legislative candidates.

It was the first major revision to legislative apportionment since 1966, when the state adopted a 163-seat House and turned mapmaking over to bipartisan commissions. The change was a reaction to a landmark 1964 Supreme Court ruling that state legislatures had to apportion representation based on population rather than geography or other measures.

The 2018 Clean Missouri initiative retained the bipartisan commissions, but as a body to conduct public hearings and, by a vote of 70 percent of members, make changes in the map created by the demographer.

Amendment 3 eliminates the post of state demographer and returns the map-making process to commissions whose members are nominated by political parties and chosen by the governor. It would also eliminate the $5 gift allowance and reduce the campaign donation limit from $2,500 to $2,400.

As part of its redistricting provisions, Amendment 3 may also change who gets counted when district lines are drawn. Instead of basing the map on the total population of the state and making each district as equal as possible, the districts could be based on the number of people eligible to vote.

Clean Missouri would have used the entire population of the state like past apportionment plans have done.

Areas of the state with a large proportion of people under 18, or non-citizens, would have been in districts with larger total populations than areas with larger ratios of older residents and U.S. citizens.

Amendment 3 makes compact districts that cross county lines as little as possible the top priority for the commission, and while it retains partisan fairness as a goal, it is a much lower threshold to meet.

Voters on Tuesday defeated Amendment 1, which was placed on the ballot by the General Assembly to extend the two-term limit currently applied to the governor and state treasurer to all other constitutional statewide officers.

Under the Missouri Constitution approved by voters in 1945, governors and state treasurers were barred from seeking re-election while no such limit was placed on the office of lieutenant governor, secretary of state, the attorney general, or state auditor. That was changed in 1965 to allow governors and treasurers to serve two terms, whether consecutive or in total.