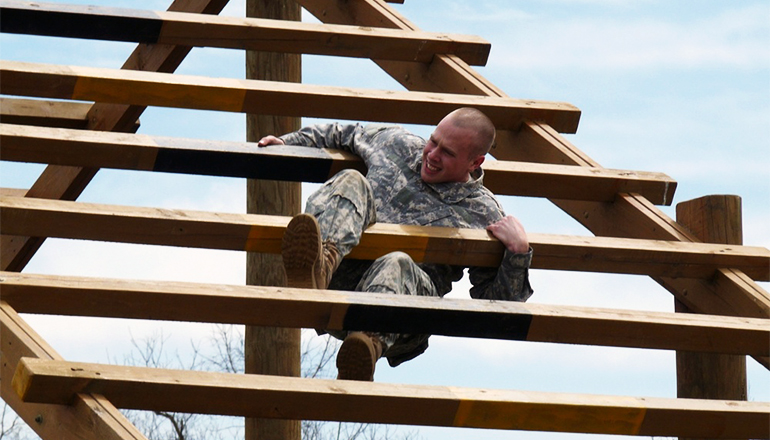 “I’m very excited. I’m very proud. I am excited to represent the Missouri National Guard at the regional competition,” said Moudy, of Marceline, who serves with Battery B, 1-129th Field Artillery in Chillicothe.

“I’m really happy,” said Tyler, of Rolla, who serves with 335th Engineer Platoon. “I knew it was going to be close between (runner-up Spc. Nate) Herndon and myself. He’s been biting at my heels this entire competition, but I’ve been pretty confident throughout.”

Day after day the nine combatants at Best Warrior, each having reached the state competition by winning at company and battalion levels, carried on.

“Stress” marksmen shoots led to warrior tasks that found Guardsmen tending to a mock casualty, assembling a radio to call for medical evacuation and reacting to a chemical attack. A 12-mile road march with a 35-pound pack whittled away at overall staying power. Day and night land navigation disoriented contestants before leading to the regulation air assault and obstacle course at Crowder.

“Every day was a struggle,” said Moudy,” just the endurance, keeping up with everything you’d done the day before. No particular event seemed the most difficult, just the link of the entire competition. It wears you down.”

“Everybody has a little bit of the competitive spirit in them; everybody wants to be the best,” said Sgt. 1st Class Cody Fields, the noncommissioned officer in charge of the training and competition that is Best Warrior. “These are the best of the best of all the brigades throughout the state. They’re here to prove themselves.”

“It is an honor to be the state sergeant major and be at this Best Warrior competition,” said Command Sgt. Maj. Will Pierce after the sergeant major boards were complete. “I am impressed and thrilled at the level of participation we have in Missouri. Our organization is strong.”

Pierce pointed out the former Best Warriors in attendance, those who had previously been named Soldier or Noncommissioned Officer of the Year, which included nearly all the major command’s sergeant majors, as well as those who work for the Guard’s Regional Training Institute and Training and Evaluation Battalion, the latter responsible for pre-mobilization training for soldiers headed overseas.

“This is a great place to meet not only the sergeant majors but some of the other top NCOs and Soldiers in the state,” said Moudy. “I’m sure I’ll see most of these guys down the road because the people you see here are the people who put forth the effort.”

Fields noted the camaraderie gained among those battling for Best Warrior, something noted by both Moudy and Tyler.

“It was a really great experience to see the noncommissioned officers interacting between themselves and with the competitors. It was more a congenial level than authoritative,” said Tyler.

Ultimately, said Fields, the contest instills basic soldier skills into those who compete. “It makes these guys strive to be one step better,” he said.

Tyler and Moudy will represent the Missouri National Guard at the Region 5 Army National Guard Best Warrior competition May 7-10 at Camp Swift, Texas. Second-place soldier Herndon and second-place noncommissioned officer Sgt. David Immler, of Jefferson City, will serve as coaches; ready to step in if the first-place winners are injured or otherwise unable to compete.

“It’s about who is the best overall soldier,” said Command Sgt. Major Jay W. Marsden with 70th Troop Command. “You can be really good at one or two facets, but if you are not confident and competent in all facets of soldiering you will not win Best Warrior.”