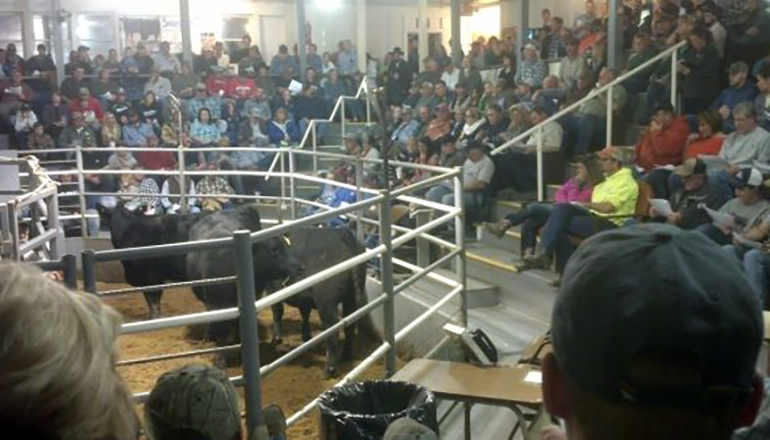 At the recent Kirksville Show-Me-Select Replacement Heifer sale, 135 heifers averaged $1,952. Despite the current volatility in the cattle market, buyers were willing to invest in the future, said Zac Erwin, sale coordinator.

“I had a feeling the demand was out there but wasn’t quite sure how all the outside factors would affect the market this year,” Erwin said after the sale Friday night, Nov. 20. “But all things considering, we had strong demand.” Several buyers viewed the sale over the internet and bought over the phone. “We wanted to make all possible accommodations for both buyers and sellers this year,” said Erwin.

The north-central Missouri heifer sale is gaining momentum. This is the sixth sale at the Kirksville Livestock Auction. “Great consignors bringing high-quality cattle build momentum with this sale,” he said.

The replacement heifers are entered by beef farmers taking part in the heifer development program of the University of Missouri Extension. MU protocols bring calving ease, better genetics, and more to replacements. Increasingly, heifers are bred by artificial insemination. That allows even small producers to use the best sires in a breed. Timed AI, when all heifers are bred at the same time, brings uniform calf crops. Buyers like short, trouble-free calving seasons. This year, 96 heifers were AI-bred compared to 39 bull-bred.

The top-selling lot in the sale averaged $2,650. Jerry and Connie VanWye, Lancaster, Mo., had a pen of three going for the top price. They were Tier Two AI bred registered Red Angus heifers. Erwin stated, “buyers like the stacked genetics of being Tier Two and AI bred and were willing to make the investment to own them.” Tier Two heifers are known for being sired by heavily used industry sires. VanWye’s also were the high averaging consigner, selling a total of six head, all Tier Two AI bred Red Angus heifers averaging $2625.

Another top lot, of five head, came from Jeff and Marge Lindquist, Greentop, Mo. They sold to a repeat buyer of the Lindquist heifers. Erwin added, “repeat buyers make a sale successful as they know what they are getting.”