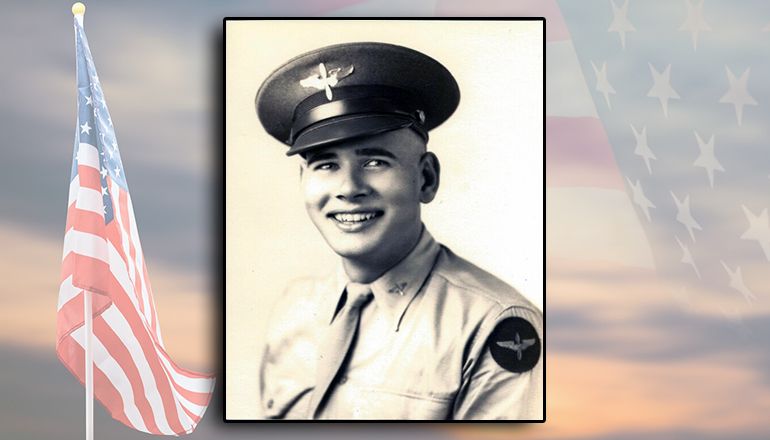 Lifetime Trenton resident and retired farmer, Donald Clark Woodard died at his home south of Trenton, Friday morning May 15th at 9:45 am. He was 96. A graveside service with Military Honors will be held at Resthaven Memorial Gardens on Thursday afternoon at 2 pm. Those wishing to attend are asked to bring lawn chairs.

Woodard was born in Trenton on September 21st, 1923 to Bill and Anna Rothenberger Woodard. He graduated from THS in 1941 and enlisted in the Army Air Corps in November of 1942. He spent 6 weeks in Basic training and months being trained in cadet, gunnery, and bombardier/navigator school. He was assigned as the bombardier in a B-24 Liberator during WWII.

Second Lieutenant Woodard and a crew of 8 others took off from Scotland on July 7th, 1944. They were told only that their target was a jet assembly plant in Bernberg, Germany. Because they were going so deep into Germany, the gas tanks were topped off to overflowing and they weren’t allowed to start their engines until just before take-off. These planes were filled to capacity with fuel and ammunition and the fear was that they would run out of fuel before they could return. They were also told that there was a less than 50% chance that they would survive.

At 23,000 feet they dropped their payload and their mission was considered a success because they did hit their target. Woodard pressed the button once the target was spotted and the lead planes began to drop their bombs. The plane was hit with heavy flak and was going down. The top gunner was wounded and unconscious and they pushed him out of the plane and pulled his ripcord for him, in hopes he would have a chance for survival. The 8 other men bailed from the plane but as Woodard prepared to do so, he discovered that his parachute was shot up and lying in a heap. He cradled it in his arms and jumped thinking he was jumping to his death.

As he drifted down a German fighter plane tried to shoot him out of the sky so an American P-38 circled him and protected him until he landed. He was a prisoner of war for 10 months at Stalag Luft I on the Baltic sea about 150 miles north of Berlin, during which time he was interrogated twice. He gave only his name, rank, and serial number as instructed. He spent his first two weeks in solitary confinement in a 5 x 7ft. cell. The second time he was interrogated his captors knew everything about him including his Mother’s Maiden name.

The rest of the time spent as a POW was in a 14-foot by 22-foot room with 21 other soldiers. There were bunk beds stacked in threes and one small stove used for heat and cooking. Food was meager and included black bread with sawdust as filler, potatoes, and cabbage. The Russians liberated the camp on May 3rd, 1945. He left France on June 9th, 1945 on a Liberty Ship named Joseph Hooker. He arrived back in his hometown of Trenton on June 23rd, 1945.

On July 22nd, 1945 he married Letha Anna Mack. He attended what was then Trenton Junior College and graduated from Drake University in Des Moines, Iowa in 1948 with a Bachelors’s Degree in Commercial Science. The Woodards returned to Trenton and farmed for the rest of their lives. He and Letha enjoyed almost 72 years together before her passing in February 2017.

Woodard was the recipient of the Trenton Area Chamber of Commerce Above and Beyond award in Agriculture in 1991. He also received the Trenton Area Chamber of Commerce Pillars of the Community Award in 2015 and he and Letha were honored as distinguished NCMC alumni in 2007. He served as Chairman of the Board for Farmers Mutual Insurance and member, elder, and trustee of the Liberty Chapel Christian Church. He was also a member of the Board of Directors for Sunnyview Nursing Home, Board of Education of Pleasant View R-6 School, and member of the Veterans Assistance League in Cameron, Mo.

Woodard was preceded in death by his wife Letha, his parents, Bill and Anna Woodard, and one brother, Billy. Survivors include two sons: Mack and Wife, Deb and Eric, and Wife, Rochelle of Trenton. Five grandchildren: Carl Woodard (Leslie) and Christina Ferguson (Jordan) of Trenton and Molly Strasser (Jake) of Big Lake Minnesota, Melissa Woodard And Rick Collins of Saint Anne, Illinois, and Chelsea Pflug (Curtis) of Wheaton Illinois, and 4 Great-Granddaughters: Claire and Layla Woodard and Harper and Jovie Ferguson. He is also survived by his sister Marge Zimmermann of Palm Harbor, Florida, and a niece and two nephews. He was a devoted Christian, Husband, Father, Grandfather, Brother, and friend to many!