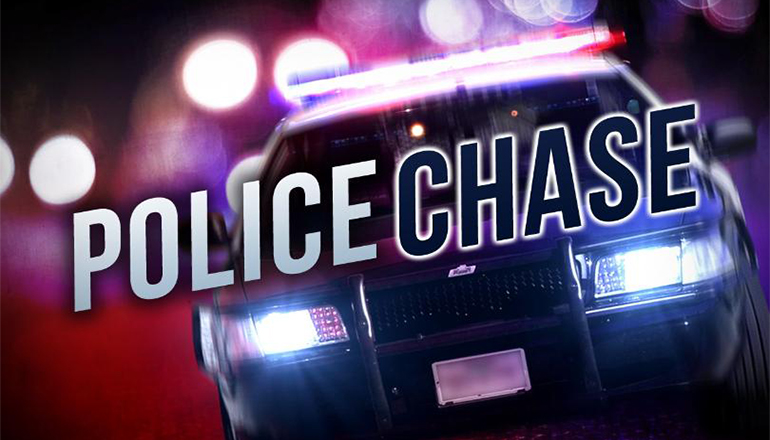 A vehicle pursuit Wednesday morning starting in Mercer County ended in the arrest of two individuals in Grundy County.

Mercer County Sheriff Steve Stockman observed the Charger occupied by a white male and white female at a residence south of Princeton on U. S. Highway 65 he had been dispatched to because the GMC truck was parked on private property there. Herring notes the truck was subsequently towed.

Stockman pursued the Charger south on U. S. 65 but was unable to stop it. Herring reports the Grundy County Sheriff’s Office took up positions in Spickard in anticipation of the vehicle reaching Grundy County, but officers never saw the vehicle. Citizens reported seeing the vehicle traveling south out of Spickard on old Highway 65.

Herring says the Grundy County Sheriff’s Office and Stockman searched the river bottoms south of Spickard along the east side of the Weldon River and discovered the vehicle had been abandoned about half of a mile south of Spickard in the woods near the river.

Herring reports that retired sheriff/Reserve Grundy County Deputy Sheriff Greg Coon observed a black Ford grain truck driving out of a private drive from the Brewer Farm’s Shop on the west side of the Weldon River. He says Coon partially blocked the grain truck after driving down the private lane to investigate.

Coon did not recognize the driver of the grain truck, and the reserve deputy sheriff climbed up to the cab to identify the white male driver and observed a white female hiding in the floorboard of the grain truck. Herring reports the driver refused Coon’s commands to exit the grain truck and drove off, causing Coon to be grazed by the truck and thrown into the side of his own vehicle, despite Coon jumping from the moving truck.

Coon then followed the truck to Highway C where it turned east, drove through Spickard, to U. S. 65, and to Highway B while he alerted other law enforcement as to his discovery and location. The grain truck continued east on Highway B to its intersection with Highway Y and then on Northeast 118th Street.

Herring reports Grundy County Chief Deputy Seth Cox caught up with Coon and the grain truck before the truck drove through a pasture on the north side of 118th Street. He says Cox and Coon approached the grain truck on foot after it spun out several times attempting to go up a hill. They were able to extricate the white male driver who resisted their efforts. Herring arrived at the scene and assisted with taking the driver and the woman into custody.

The driver has been identified as 35-year-old Larry Edward Brown of Worthington, Minnesota. He has been arrested on a felony larceny warrant from Pottawattamie County, Iowa and has charges pending in Mercer and Grundy County.

The 31-year-old female of Mercer is being held at the Grundy County Detention Center pending formal charges in Grundy County. Herring says the identity of the woman will not be made public until she is formally charged.