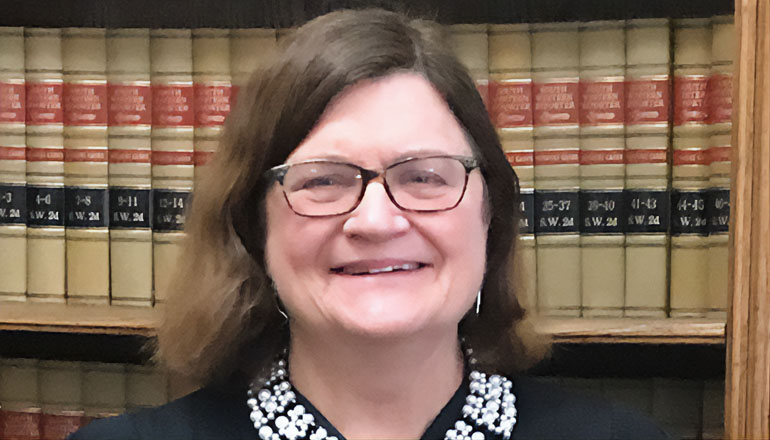 The photos have come down off her office walls. Stith has packed up her certificates and awards she proudly showcased in her third-floor office along West High Street in Jefferson City.

“This will be a big change. I’ve been thinking about when to retire for some time because of course, I knew mandatory retirement was coming up at age 70 in a couple of years,” she tells Missourinet. “I don’t leave things to the last minute. I have been thinking of when would be appropriate to leave. I’ve had this in mind for a while and 20 years just seems like the right time.”

Stith was appointed to the high court in 2001 by then-Governor Bob Holden and she served as chief justice from 2007 to 2009. She is the second woman ever to serve on the Missouri Supreme Court.

“I’m so grateful for having had the opportunity to be a judge in the Missouri justice system. It’s been truly the honor of my life. I could not have done anything that would have made me personally feel happier because I think I could make my best contribution to society as being a judge. To have had the opportunity to do that was just a blessing,” Stith says.

What will she miss the most?

“I’ll miss really the whole purpose of the Missouri Supreme Court and the reason I applied to be on it, to begin with is that our job is to do justice the best we can under the law,” says Stith. “I started out as a law clerk to a judge on the Missouri Supreme Court in 1978. So, a while ago now. I saw the embodiment of that love of the law and of trying to do the right thing in him and became an important role model for me in my legal career. I always knew I wanted to emulate him, and I’ve been able to do that as a member of the court. My greatest joy is just that – every day I go to work thinking I can make a difference in what I do today in work. I also love the way the judges on the court relate with each other. We collaborate. We talk to each other. We listen to and respect each other. As that seems to become rarer and rarer in some aspects of public life, it’s just a joy to me that we have not lost that in the court.”

Stith was a law clerk for Missouri Supreme Court Judge Robert E. Seiler from 1978 to 1979.

As for her most memorable and most challenging cases, she says they are the same. The case involved whether a person convicted of murder could be executed if they were a juvenile at the time they committed the crime.

“Back in 2003, so I had only been on the court for a couple of years, we had the case of what became known in the U.S. Supreme Court as Roper vs. Simmons. The U.S. Supreme Court had said you could not do that for someone who was 14 or 15, but they said it was okay for someone who was 16 or 17. The question before us was that had been said some 15 years before and did that still apply because the test they applied was as society evolves we are going to have different rules on what we think is cruel and unusual – what we think is okay or not okay. So, in the 1700s, someone might have been able to be executed at age 12. So, what was the point at which society accepted that kind of punishment for a crime committed by someone who is still growing, still learning, their brain is still developing.”

Christopher Simmons, who was 17-years-old when he kidnapped neighbor Shirley Crook in 1993, tied her, and threw her off a bridge in St. Louis County. Prosecutors claimed Simmons had boasted that because of his age he could get away with killing the woman. Initially, Simmons was sentenced to death, but his attorneys argued he should not be executed because of his age at the time of the killing.

Stith wrote the court’s 4-3 opinion ruling a person convicted of murder cannot be executed if they were under 18 years old at the time they committed the crime. The U.S. Supreme Court ultimately agreed, ruling 5-4.

“It was the most important decision because it affected whether people would live or die in 50 states and it was the most challenging because you are balancing so many difficult decisions of trying to do justice to everybody – to the victims, to the families, to the defendant and recognizing the rights and responsibilities of each is very difficult,” she says.

What’s next for Judge Stith? She will stay on as a senior judge in the Missouri court system.

“Immediately, that means there are some cases that are still under submission to the court that we have heard arguments in, had the briefs, but they are not yet decided. I can be appointed specially to finish up those cases,” says Stith.

She can also sit with any other court in the state. For instance, if a judge is absent and not able to take part in a Court of Appeals argument. The court could invite her to join them.

She can also help the courts with special issues.

“We have some of our senior judges working on special projects regarding helping the courts figure out how to stay working effectively in this time of COVID-19, or how to deal with issues of the municipal courts that have become so much known and talked about in the last number of years, or dealing with other issues that are special – that really need some intense thought, and discussion, and collaboration of people from all different backgrounds in the court system.”

According to Beth Riggert, Communications Counsel with the Missouri Supreme Court, the seven-member Appellate Judicial Commission will open Stith’s vacancy soon. The public can nominate individuals to be considered. Traditionally, the commission interviews all applicants. A panel of three nominees are recommended to the governor. The governor then has 60 days to appoint a nominee to the court.