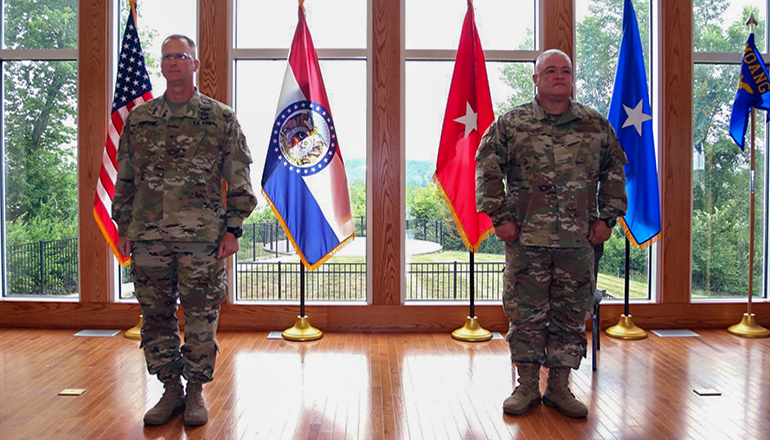 In a ceremony at the Missouri National Guard’s Joint Force Headquarters here, Col. Ken Eaves was promoted to the rank of brigadier general. Eaves officially assumed the role of Assistant Missouri National Guard Adjutant General July 11. During the ceremony, Cumpton lauded Eaves’ many accomplishments that qualified him for this important position on the Guard’s command team.

“Brig. Gen. Eaves is an outstanding officer who is ready to lead at a higher level,” Cumpton said. “During his tenure as commander of the 131st Bomb Wing, the National Guard’s only B-2 Spirit stealth bomber wing, the wing repeatedly distinguished itself in federal and state metrics. His experience training and preparing Airmen and women for their state and federal mission is unparalleled in the Air National Guard.”

In his new position, Eaves will serve as the commander of the Missouri Air National Guard’s more than 2,300 Citizen-Airmen.

“I am honored Brig. Gen. Cumpton selected me for this position, and look forward to leading and supporting Missouri’s Airmen at a higher level,” Eaves said. “Our Citizen-Airmen are among the nation’s best and have served with distinction in Afghanistan, Iraq, and around the world. They have also supported the people of Missouri dozens of times in the past decade during state emergency missions.”

The Missouri Air National Guard has two flying wings and a state headquarters. The 139th Airlift Wing, which flies the C-130H Hercules aircraft, is located in St. Joseph, while the 131st Bomb Wing, which flies the B-2 Spirit stealth bomber, is headquartered at Whiteman Air Force Base with additional Airmen at Jefferson Barracks near St. Louis. As Assistant Adjutant General, Eaves will be stationed at the Missouri National Guard Headquarters in Jefferson City.

“Our Airmen have repeatedly answered the call at home and abroad,” Eaves said. “On any given day, we have Airmen deployed or training to deploy to support their federal mission. In the past several months, Airmen have been staffing COVID testing sites and supporting other missions for the state’s COVID-19 response efforts. No matter the challenge, our Airmen are always ready. ”

At Whiteman, Eaves worked closely with the 131st’s classic associate partner unit, the active-duty 509th Bomb Wing. The partnership is touted as a model for Air Force total force integration, with active duty Air Force and National Guard Airmen working together as one integrated team.

Eaves is a highly-experienced pilot with more than 3,400 flight hours in the T-37, T-38, F-15, and B-2. He flew combat missions during operations Provide Comfort and Northern Watch. As commander of the 131st Bomb Wing, he served a key role in ensuring the readiness of the National Guard’s only B-2 wing. Additionally, Eaves has a broad background of experience with assignments in flying operations, instruction, safety, wing staff, and command positions.

Eaves is a graduate of LeTourneau University in Longview, Texas, and the Air War College, Maxwell Air Force Base, Alabama.