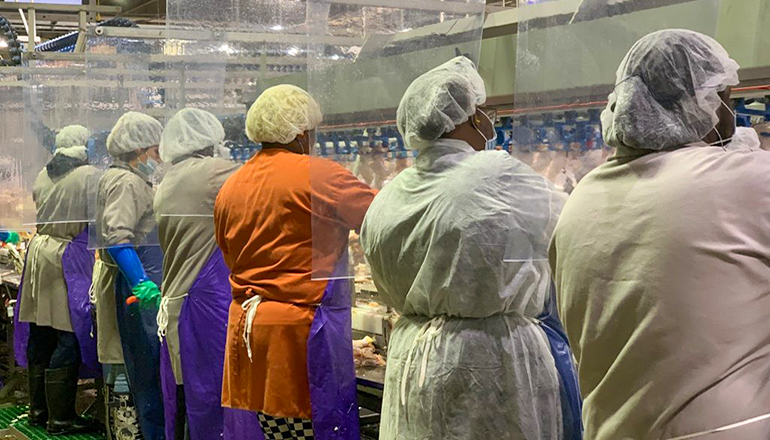 But Seaboard is part of a small but growing trend in the meatpacking industry, which already largely relied on an immigrant workforce: More foreigners are being hired to perform the dangerous job of cutting and packaging America’s meat.

In 2015, six plants requested to hire foreign workers. Last year, the number rose to 11, according to an Investigate Midwest analysis of U.S. Department of Labor data. (Data for 2021 is not yet available)

That includes Triumph Foods in St. Joseph, Mo., which hired 100 foreign workers late in 2019 to help with its peak season, according to labor department data.

Each year since 2017, Seaboard has employed at least a hundred workers on H-2B visas. Under the federal program, businesses can hire foreigners for temporary jobs when faced with labor shortages. Most visa holders work as landscapers, maids, and cooks.

Industry experts said foreign workers — whose time in the states is tied to the employer sponsoring their visas and, generally, aren’t members of plants’ unions — are probably less likely to speak out about working conditions in an industry where lacerations and amputations are common.

“(Plants) need to employ a lot of people, and you have to push them as hard as possible,” said Joshua Specht, a professor at the University of Notre Dame who has studied the meat industry. “The best way to do that, obviously, is to focus on employing people who are rather marginal and who are willing to put up with being overworked.”

The North American Meat Institute, meatpacking’s lobbying arm that often speaks for the industry, did not respond to multiple requests for comment over several weeks about the increased use of H-2B visas or criticisms of plant safety.

The Department of Labor approves applications for H-2B visa labor and ensures the visa workers’ rights.

“The Department takes very seriously violations of H-2B program requirements and strives to protect the wages, working conditions, and safety of all workers, especially during these difficult and challenging times,” agency spokesman Grant Vaught said in a statement.

Martin Rosas, the president of United Food and Commercial Workers Local 2 that represents workers at Seaboard, said workers are conditioned not to complain because they have to go through the rehiring process each year.

“The company gives them a different color of hat,” he said. “That alone makes them a target by the supervisor, by anyone who wants to mistreat workers.”

Employing H-2B workers from October through June allows the company to keep up with high demand, and it treats every employee equally, a Seaboard Foods spokesman said. All receive a starting wage of $17.25, paid holidays, and health insurance, he said.

“The H-2B participants are treated exactly the same as full-time production workers,” he said.

Because more than a thousand employees are on the production floor during a shift, different hat colors allow workers and supervisors to easily identify each other, he said.

To qualify as an H-2B employer, a company must pay a wage equal to or above the industry’s prevailing wage or the area’s minimum wage. But, across all industries, H-2B workers are often paid less than U.S. workers, according to the progressive think tank Economic Policy Institute.

Another requirement for a company hiring H-2B visa labor is to show a shortage of available workers. However, according to an EPI report, the U.S. economy shows no sign of labor shortages in the industries that often use H-2B visas. DOL data in the report shows about 5 million unemployed workers in occupations with H-2B approvals.

One criticism of the visa program is that positions can become semi-permanent because companies request extensions.

“It really has become a way to replace labor in the United States for cheap jobs,” said Victoria Mesa, a civil rights attorney with the Immigrant Justice Project at Southern Poverty Law Center.

The situation where a person’s time in the country — and so their ability to make a paycheck — is tied to their employer is similar to the H-2B’s agricultural counterpart, the H-2A visa. Workers often endure abuse and exploitation because they don’t want to be deported.

Centro de Los Derechos del Immigrante, Inc., an organization that helps to improve the working conditions of Mexico-based migrant workers in the U.S., interviewed 100 workers on H-2A visas and concluded all had had their rights violated.

“Many find that when they arrive in the U.S., conditions are far different from those promised,” reads the organization’s 2020 report. “Even workers who described a generally positive experience with their employer labored in a workplace with at least one serious legal violation.”

Angela Stuesse, an anthropology professor at the University of North Carolina at Chapel Hill, said the meatpacking industry allows workers to endure repetitive labor that leads to injuries.

Meat and poultry workers experienced about 160 cases per 10,000 employees in 2013, compared to about 40 cases for manufacturing overall, according to a 2016 U.S. Government Accountability Office report. The injury rate decreased between 2004 and 2013, but it was still higher than manufacturing overall.

Both those rates are likely higher because workers and employers may underreport injuries and illnesses, according to the report.

Specht, the industry historian, said the meatpacking industry has a long history of worker exploitation.

Initially, meatpacking plants were built in populated cities, giving workers an opportunity to protect themselves by creating unions, he said. However, after World War II, new meatpacking companies began to migrate to rural areas and did not continue to use a traditional union workforce.

With the move to rural areas, plants sought a workforce that was willing to work cheaply and live away from city amenities, according to a U.S. Department of Agriculture study. They turned to Latin American immigrants and, more recently, African refugees.

In 2015, about a quarter of all meat and poultry workers were foreign-born non-citizens, according to the GAO report.

The numerous languages spoken at a plant attest to its diverse workforce. One South Dakota plant employs a workforce where about 40 languages are spoken, according to a Centers for Disease Control and Prevention report.

But the many languages can also foster an inability for workers to protect themselves, Specht said.

“It’s not just an issue between English and Spanish,” he said. “It’s also the fact that in some of these facilities, you might have a dozen different languages being spoken. Workers can’t talk to each other, or organize particularly effectively or even advocate for themselves.”

A complaint at Seaboard Foods

In 2016, UFCW Local 2 learned Seaboard — the country’s second-largest pig producer and the fourth-largest pork processing plant — planned to hire H-2B workers, said Rosas, the union’s president. Soon after, the union made an effort to recruit them. Its collective bargaining agreement allows the union to speak with visa workers about joining its ranks.

But, compared to their domestic counterparts, few workers on visas have joined.

Out of about 2,000 employees, 95% are union members, Rosas said. Last year, Seaboard requested its highest number of visa workers: about 180, according to DOL data; about 40% are unionized, Rosas said.

In April, UFCW 2 submitted a complaint about Seaboard Foods to the Occupational Safety and Health Administration. The union claimed that the company did not do enough to protect workers during the pandemic, that it penalized workers for taking sick leave, and that it excluded at least four languages regularly spoken at the plant from COVID-19 posters and training.

After the company told the union it applied for more H-2B workers for this year and next, the union also complained in July to the DOL’s Office of Foreign Labor Certification.

At issue is worker pay.

Seaboard Foods’ base wage rate starts at $17.25 for all workers, including those on visas. But other area plants — the National Beef plant in Liberal, Kansas, and the JBS plant in Dalhart, Texas, both about an hour from Guymon — pay their workers at least $3 more, according to the union’s letter.

But Seaboard is attempting to show it pays the industry’s prevailing wage in the area in order to qualify for the visa program, according to the letter.

Vaught, the DOL spokesman, said the wages agreed upon in the collective bargaining agreement would supersede the local area’s prevailing wage when determining pay for H-2B visa workers.

The union’s letter also claims that Seaboard Foods does not face employee shortages, which is a requirement for applying for visa labor.

“The workload and workforce need is consistent throughout the year; it is not seasonal, impacted by peak load or intermittent,” the union’s letter reads. “Seaboard … has hired workers with the H-2B visas from 6 to 9 months for each of those years.”

Seaboard’s spokesman said the pork industry has historically seen increased demand from January to March and October to December, which is why there is a need for temporary workers.

“One of the many ways that Seaboard Foods attempts to mitigate workforce challenges is the Labor Department’s H-2B program,” the spokesman said.

Regardless of who is performing the job, the bottom line is plants are dangerous workplaces, said Debbie Berkowitz, worker health and safety program director from the National Employment Law Project.

“The industry doesn’t invest in safe conditions,” she said. “They’re just trying to get the most vulnerable workers who won’t speak up and won’t reveal what happened.”

Luis Velazquez is an investigative intern with the Midwest Center for Investigative Reporting and a reporter for Cicero Independiente.