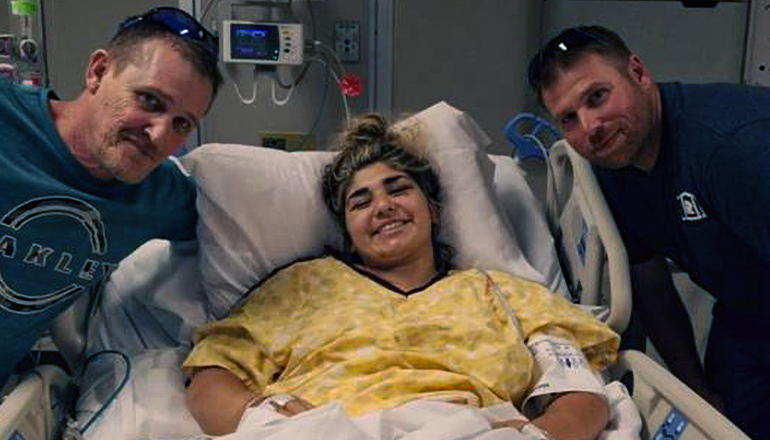 Injured Trenton Police Officer Jasmine Diab reports via Facebook that she’s feeling grateful for the citizens who came to her aid Friday afternoon at Winston after being shot while transporting a prisoner in Daviess County.

A photo of Jasmine and two of the men was posted to the Helping Jasmine Diab Facebook page. The police officer remains in Truman Hospital but is said to be recovering.

To begin her posted statement, Jasmine offered thanks to everyone for support through this emotional tragedy she’s been going through. The statement added it means so much that everyone is giving so much support. It also stated she hasn’t been able to answer messages because of sleeping much of the day and night.

Tuesday, while in the hospital bed, Jasmine reports she got to meet two men she described as her heroes Rick Shannon and Jason Gamm. She wrote that she was at a loss of words and overly emotional as these two men entered the room. The statement from Jasmine continued that if it weren’t for them taking the initiative to remove the prisoner from being on me, she would have died from blood loss after being shot.

Diab is asking the public to take time out of your day to show appreciation to these heroes. Rick Shannon is from Smithville and Jason Gamm is from Kansas City. Several citizens came to the aid of the wounded officer and subdued prisoner, Jamey Griffin, in the Friday afternoon incident.

A GoFundMe account has been set up by a friend and co-worker to assist with expenses after Diab leaves the hospital. Thus far, the account at the time this article was posted had achieved just a little over $1,000.