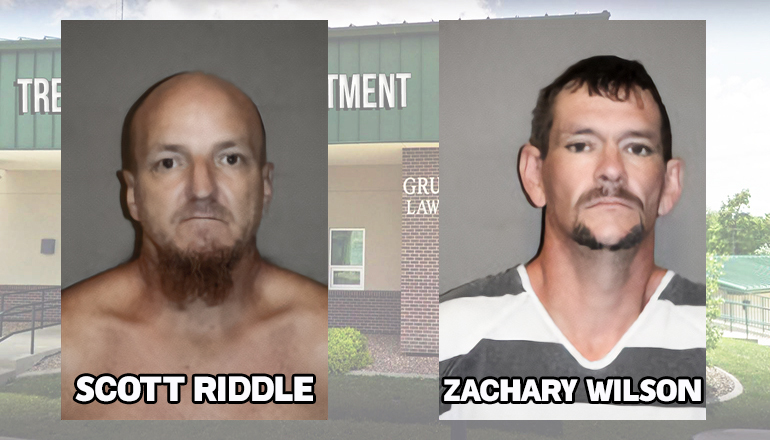 Thirty-six-year-old Zachary Lee Wilson of Spickard has been charged with the felonies of unlawful use of a weapon involving exhibiting, first-degree property damage, and armed criminal action. He also has been charged with misdemeanor unlawful possession, transport, manufacture, repair, or sale of an illegal weapon. Bond was set at $10,000 cash only.

Court documents accuse Wilson of exhibiting brass knuckles at 1101 Snyder Street on September 20 in an angry or threatening manner in the presence of one or more persons. He is also accused of damaging a 2001 Mercury Sable owned by Rodney Lawrence by kicking it and hitting it with brass knuckles on the doors and windows.

Forty-seven-year-old Scott Eric Riddle of Trenton has been charged with the felonies of operating a vehicle on a highway without a valid license involving a third and subsequent offense and third-degree domestic assault. Bond was set at $5,000 cash only.

Court documents accuse Riddle of operating a motor vehicle on East 21st Street on September 20 during a time he did not have a valid operator’s license. Court information indicates he was convicted in Livingston County Circuit Court in January 2021 and Grundy County Circuit Court in January 2000 of driving without a valid license. Riddle is also accused of causing physical pain to a woman related by marriage by hitting the woman on the top of the head with a pitcher and pushing her down.

Thirty-year-old Avery Elizabeth Mock of Spickard has been charged with felony first-degree property damage. She was arrested at the Grundy County Detention Center, and her bond is $2,500 cash only.  Court documents accuse her of damaging three commercial door handles, a steel door frame, a door stopper, and a door closure owned by the Grundy County Law Enforcement Center. She allegedly caused the damage in July while exiting the building and slamming a door.

Wilson, Riddle, and Mock are scheduled for the Associate Division of Grundy County Circuit Court on September 28th.