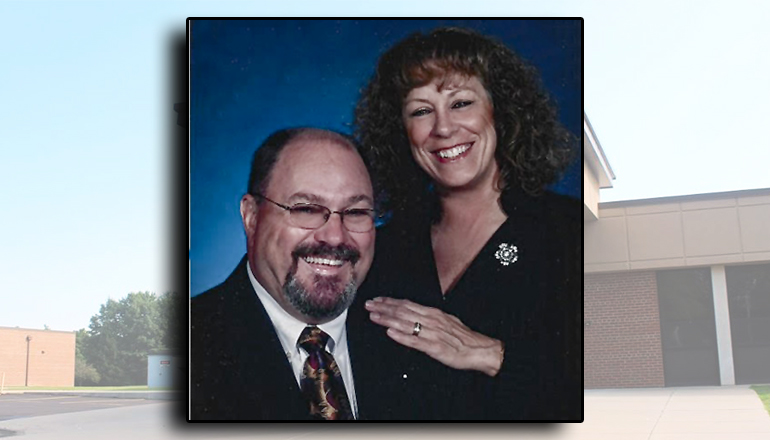 THS Graduate, Teacher, Coach, Principal, Administrator, and Board of Education Member, and Friend, all are descriptive of this year’s THS Honoree – George Robert Moore.

Selected by the THS Class of 1996. George Moore is no stranger to the campuses of the Trenton R-9 School District. George began his educational path at Norton Elementary School, advancing to Central Junior High and on to Trenton High School. From there he continued his education at Northeast Missouri State University where he received a Bachelor of Science Degree in Education.

An active student in the Trenton schools, George was a member of the Student Council and The Trentonian school newspaper staff, a class president, inducted into the National Honor Society, T Club member, TAWANA King candidate, and participated in football, basketball, and track. During the summer, George played baseball through the Trenton Baseball Association Little League and Pony League, American Legion Baseball, and Ban Johnson Baseball. While pursuing his degree in college, he participated in collegiate football, basketball, and baseball.

George began his 31-year teaching career at Grundy County R-5 in Galt and later taught in the school districts of Maysville, Milan, Gallatin, and Breckenridge. In 1986, he came home to teach and coach at Trenton. During his first 14 years in the Trenton schools, he taught 7th and 8th-grade Mathematics, Pre-Algebra, Algebra, and Computer Applications at Adams Middle School. He transitioned to Principal at Trenton Middle School in 2000. In the 2003-04 school year, George moved to the R-9 District Office and assumed the duties of Director of Supportive Services (Building and Grounds), Activities and Athletics, Transportation, and Safety. George retired from education in 2007. He then spent six years serving on the R-9 Board of Education.

George says there are many special memories from his years of teaching in the Trenton system. Just a couple to share; in the early ’90s, his 7th-grade Mathematics students scored at the top of all students on the MMAT’s. He was also honored to sing the introduction of Chubby Checkers’ “Let’s Do The Twist” while Donalyn Crowley and Shari Wyatt danced at a Middle School Spring Concert.

Many changes have occurred during his tenure at Trenton and perhaps the most notable was the sale of the former THS/Adams Middle School building and consequentially the combination of the high school and middle school campuses, and the integration of technology at all levels from PreK through Grade 12.

In addition to his coaching and teaching, George valued his commitment to the First Christian Church – Disciples of Christ. A life-long member, he has served as Elder, Deacon, Board President, Sunday School Teacher, Choir Member, sound system operator and he currently drives the church van.

George’s interests fill his days since retirement. He is President of the Trenton Lions Club, President of the Friendship Place Apartment Board, and a member of the Grundy County Museum Board. For 11 years, he has enjoyed farming with his good friend and high school classmate, Jim Binney. An avid NASCAR fan, George has attended races at Charlotte, Texas, Phoenix, and Kansas.

George’s greatest pride and joy are his family. Married to wife, Kay for almost 22 years, he has three daughters: Kari Whitaker (David), Kristi Campbell (Rob), Kelli Griffith (Phil), and one stepdaughter, Lindsey Jacobs (Joe), and one stepson, Tom Lattimore (Claudia). In addition, he is blessed with 11 grandchildren and one great-grandson.

When asked what his reaction was when notified of his selection as the 2021 honoree, he said “I feel very honored to be selected by the Class of 1996. I have enjoyed watching them develop from middle school youth to young adults in high school.” George believes the annual Alumni Reunion is so important and says “it is always special for me to be reunited with former students during this weekend, whether they have made a home in Trenton or have come back for a visit.”

George sends his appreciation to those volunteers who have made and maintained the Alumni Association and made Trenton’s Alumni Weekend one of the best celebrations in the country for class reunions. “Those dedicated volunteers are vital to keeping the “spirit of support” ongoing. I encourage all generations of recent graduates to commit themselves to the support of future alumni celebrations.”

A great choice for this year’s honoree and we hope that if you see George Moore around during Alumni Week-end, thank him for his service in so many roles and the impact he has had on the educational system at Trenton R-9.