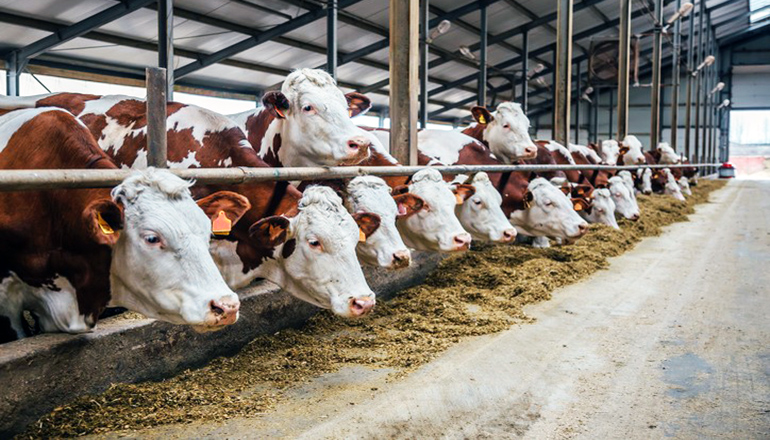 Wintering cows in a year with bad hay or shortages of hay proves challenging to beef farmers with the prolonged drought last summer upsetting haymaking plans.

Less hay can be fed by feeding grain supplements. But that takes management. Hay per cow can be cut from 30 or 40 pounds to 10 pounds. However, hay should not be eliminated.  The cow rumen digests fiber. Overfeeding starch disturbs rumen microbes without proper adaptation. “From the standpoint of feed costs, corn makes sense,” Bailey said. But too much corn upsets rumen digestion.

He told the group that corn can solve some feed needs this winter, but caution is needed when feeding high-starch supplements.  Limit corn to 6 pounds per head per day, he warned.  “There’s an answer for high-priced, low-quality hay,” Bailey said. “This is where distillers grains shine.” Byproduct feeds contain both protein and energy. Most of the starch went into making fuel.

Lower starch makes distillers grains more useful than cheaper corn.  But Bailey doesn’t dismiss the use of corn.  “Feeding a bale of $85 hay makes no sense. It’s tough to pencil a profit,” he said.  He outlined ways to limit the amount of hay fed. Plan only 10 pounds of hay a day for a safe start in making a ration.

A major price problem faces farmers. Much of the available hay became too pricey to feed. Second, available hay may not have enough TDN (total digestible nutrients).  Earlier he’d said a cow needs hay of at least 55 percent TDN. That $85 hay might be only 50 percent TDN, which means it needs a supplement.  “If hay is scarce and overpriced, corn has a place,” he said. Whole or cracked corn can be used. Cracked corn digests better, but the cost and trouble of grinding corn may not be worth it. Feed it whole.

In follow-up, farmers had questions about that 6-pound limit on corn for cows. They were taught 3 pounds was the limit. Bailey said research at Kansas State University shows 6 pounds to be safe. “That’s been duplicated in other research,” he added.

Again and again, Bailey said, “More corn means more management.”  Care is needed when adding corn to hay of unknown TDN. Too often producers don’t know the energy or protein in hay they buy. That’s needed to determine the supplement. Hay testing is a start.

Ration-building advice is available from MU Extension specialists. Regional specialists can be located through county extension centers. “We’re here to help,” Bailey said. That’s at the state and regional level.

Bailey keeps busy with extension meetings along with talks on winter feeding as his events prove popular across the state.

The Missouri Livestock Symposium gives free programs on wide ranges of topics. Area farmers pick topics and speakers for their annual meeting.  Many speakers come from the MU College of Agriculture, Food and Natural Resources, Columbia.