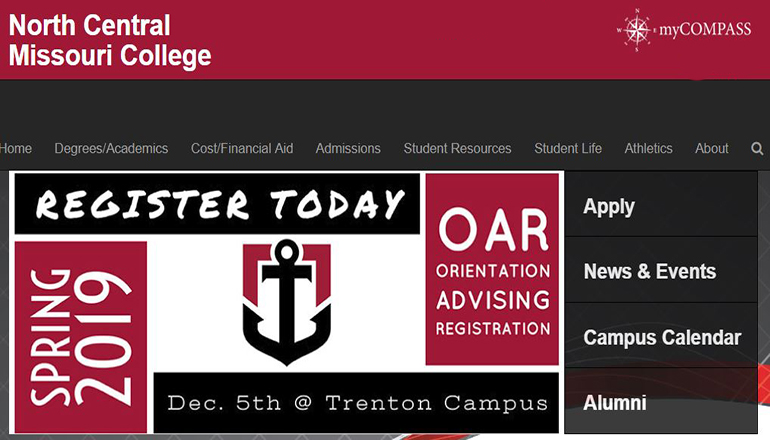 The North Central Missouri College Board of Trustees approved the fiscal year 2018 annual audit as presented at its meeting last (Thursday) evening. Matt Wallace of KPN reported the audit received an unmodified, clean opinion. The report audited the college, Building Corporation, and Foundation financial statements through June 30th, 2018. Wallace said the college’s total assets were 34.9 million dollars, liabilities were 11.3 million dollars, and the net position was 25.1 million dollars. He noted there were no findings regarding internal controls. Federal programs also received an unmodified opinion. Wallace said the audit for NCMC “went smoothly”, and the college is “operating very well”.

The board approved the purchase of property/casualty/liability insurance through the Missouri United School Insurance Council (MUSIC) for the 2019 calendar year for nearly $166,900 ($166,899). That is about $14,800 ($14,789) more than last year’s premium, which is a nine point seven percent increase. The line rates are the same as last year, but the assessment is up due to changes in payroll and property values and workers compensation claims. The increase, according to NCMC officials, “was expected”.

The board granted Green Hills Head Start Executive Director Doctor Beverly Hooker Emeritus status. NCMC President Doctor Lenny Klaver nominated her for the status in a letter to Board of Trustees President Don Dalrymple. He said Hooker has served Head Start as the executive director “with exemplary performance” for 21 years and “has demonstrated outstanding consistency in remaining current and compliant with federal regulations”. Klaver noted Hooker has presented monthly updates to the board, holds policy meetings with trustees invited and present, and “has done a tremendous job” informing the board and Klaver of enrollment numbers, budget presentation and management, grant applications, facilities status, and programming. He called Hooker’s professionalism “above reproach” and rates her “at the top of the scale among agency administrators” Klaver has supervised in his career. Hooker’s new title will be Director Emerit. The board accepted her retirement as the Green Hills Head Start executive director in November. Hooker’s last day of employment will be January 31st. She informed the board her successor needs to be approved at the federal level before a job offer is presented to the person.

The board approved the retirement of full-time Head Start Chillicothe teacher Robyn Melte. Hooker said Melte has worked for Head Start for “many years”. The employment was approved of Linda Brown of Numa, Iowa as a full-time Head Start Unionville Center co-teacher. Hooker mentioned Brown has a Bachelor of Arts degree in Human Services and more than 10 years of experience as a preschool teacher, childcare site manager, Parents as Teachers instructor, adult educator, and family engagement worker. Brown is also a former Head Start parent.

Hooker reported Head Start’s wait list includes 92% of children who are “over income”, while the Early Head Start’s wait list includes 62% who are “over income”. She believes the Early Head Start is “doing a good job” of serving those it is supposed to, and Head Start recruits all year. There is a possibility of a one point seven seven percent cost of living allowance application for fiscal year 2019. If Green Hills Head Start received the funds, it would be after February 1st.

Vice President of Academic Affairs Doctor Tristan Londre reported the National League for Nursing approved an application for a nursing program at NCMC.

Associate Vice President for Student Affairs Doctor Kristen Alley said an academic recovery workshop will hopefully be piloted at NCMC next fall. She reported 795 students who were once on academic probation have maintained a “good status”. Alley also reported headcount is up, but credit hours are down slightly at NCMC.

President Klaver said MCCA President and Chief Executive Officer Brian Millner attended NCMC’s Legislative Forum Monday. Millner told Klaver he thought the forum was good and wants to continue to come in the future. Klaver also believes the college should continue to hold the forum. He reported a discussion was held on the Missouri Department of Higher Education Financial Aid Recommendations at the Missouri Community College Association Presidents and Chancellors December meeting. He said discussion focused on changes to the A Plus program.

The group was unified in its stance to keep changes at a minimum and the Department of Higher Education’s recommendation for determining the program’s awards based on gross adjusted income instead of the Federal Pell Grant determination based on estimated family income.

Klaver said the MCCA Presidents and Chancellors meeting also included a discussion on MOExcels Grant requests by two- and four-year colleges. He explained Department of Economic Development Rob Dixon, Department of Higher Education, and Hawthorn Foundation members recommended 26 projects be considered for funding, which are ranked by the evaluation’s scoring system.

NCMC’s Leading Edge: Ag and Manufacturing proposal for $350,000 is ranked number 12 on the list. Klaver said there is no guarantee NCMC will receive the MOExcels funding. He also talked about the Missouri Public Schools and Education Employee retirement systems. He explained under current law, any person retired from the Public School Retirement System may be employed by an employer included in the retirement system in a position that does not normally require a teacher certification and earn up to 60% of the statutory minimum teacher salary without a discontinuance of the person’s retirement allowance. Anyone employed in excess of the limitations is not eligible to receive the retirement allowance for any month in which the person is employed.

Klaver reported a bill filed by State Senator Gary Romine would exempt any person retired and receiving a retirement allowance from the Public School Retirement System employed by a public community college from those provisions of law.